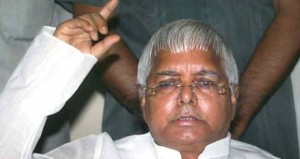 PATNA : RJD chief Lalu Prasad has turned to vaastu shastra ahead of the Lok Sabha polls to rid himself and his family of misfortune and ill-luck and to ensure good electoral performance of his party With over a dozen of his senior party leaders, including a Rajya Sabha member, half a dozen legislators and former ministers, deserting him and joining rival parties, and the Rashtriya Janata Dal’s alliance with the Congress not being seen as a winning combination, Lalu Prasad has ordered that a pond be filled up following a suggestion from an expert in vaastu shastra and an astrologer.
“A pond located inside the sprawling 10 Circular Road, the official residence of (his wife and former chief minister) Rabri Devi, was filled with a mix of mud and sand as per the advice of an vaastu expert,” said a staff at Rabri’s residence.The pond was dug in 2006 for popular Chhath festival performed by Lalu and Rabri after they shifted from 1 Anne Marg, the chief minister’s official residence, since the RJD was ousted from power in November 2005.
According to RJD leaders close to Lalu Prasad, a vaastu expert suggested that the pond be filled up since it was located in the middle of the house and creating negative energy and obstacles for the family and the party.
Vaastu shastra is an ancient Hindu architectural doctrine that is believed to help occupants of the structure or house lead a happy life.Lalu “has faith in superstition, astrology and rituals to perform religious worship”, an RJD leader said.The RJD chief has been visiting various temples and tombs and even paid a visit to a tantric or self-claimed god man Pagla Baba in Uttar Pradesh’s Mirzapur district last year.
A ruling JD-U leader recalled that Lalu was a different man when he took over as the chief minister of Bihar for the first time in March 1990. ”Lalu was radical. (He) used to make fun of babas and religious beliefs, but over the years troubles and uncertainty in politics have turned him superstitious.”