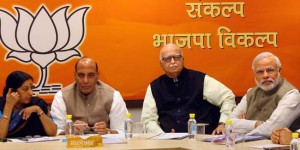 NEW DELHI : The BJP could end suspense today on at least one seat that Narendra Modi, its prime ministerial candidate, will contest in next month’s general election, as top leaders gather in Delhi for a series of crucial meetings. The party’s parliamentary board, made up of the BJP’s 12 top decision-makers met a short while ago to take stock of mergers and alliances that the party has struck and is considering.
The BJP has been on over-drive to induct or align with political parties to cover areas in the country where it lacks influence.The party’s central election committee, a bigger group, will now begin discussing candidates for elections 2014, including Mr Modi’s seats. The party is said to be considering Varanasi in Uttar Pradesh and, sources said, Mr Modi might also choose to contest from either Ahmedabad East or Vadodara in Gujarat, his home state.
The BJP is expected to contest about 450 of the 543 seats. “The election committee will first take up the states and seats where there is unanimity on candidates. These are 110 odd seats,” a top leader told NDTV.
The Varanasi seat in Uttar Pradesh is controversial – fielding Mr Modi from there will mean uprooting sitting MP and senior leader Murli Manohar Joshi who has made it amply clear that he is not happy to shift.  Seats in UP are unlikely to come up for discussion today.