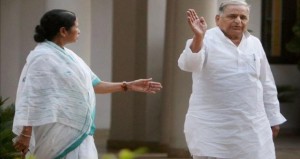 NEW DELHI : The low turnout and Anna Hazare’s absence at Trinamool Congress chief Mamata Banerjee’s rally here Wednesday was not the first time the politician’s hopes have been belied in the capital.
Hazare, who had last month extended his support to Banerjee, did not attend the rally at the Ramlila Maidan here. Banerjee sought to explain the poor attendance by saying it was not a Trinamool Congress rally, while an aide of Hazare said he would have gone if there were 10,000 people at the Maidan.
Earlier also, Banerjee had to face disappointment in Delhi when in the run-up to the last presidential elections, Samajwadi Party chief Mulayam Singh Yadav had made an about-turn after proposing three names jointly with the Trinamool chief. Banerjee and Mulayam Singh had announced the names of Prime Minister Manmohan Singh, former president A.P.J. Abdul Kalam and former Lok Sabha speaker Somnath Chatterjee as candidates for the presidency. However, Mulayam Singh did a U-turn and said his party would support the United Progressive Alliance candidate Pranab Mukherjee in the presidential elections. The Trinamool Congress, too, eventually supported Mukherjee.