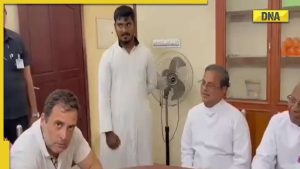 l Meets Pastor, Triggers “Bharat Jodo” vs “Todo” Rahul CHENNAI: Congress Leader Rahul Gandhi’s visit to a pastor in Tamil Nadu during a short break amid the party’s ‘Bharat Jodo Yatra’ has given a new ammunition to the BJP. The Catholic priest, during the interaction with Mr Gandhi, said, “Jesus is the real God…not like Shakti”, drawing sharp reactions.
A one-minute clip of Congress leader Rahul Gandhi’s conversation about Jesus with George Ponniah a controversial Catholic priest in Tamil Nadu’s Kanyakumari district that’s going viral has triggered an all-out social media war with the Bharatiya Janata Party (BJP). While the BJP claims that Gandhi’s discussion “hurt Hindus’ sentiments”, the Congress has denied the allegation, calling it “typical BJP mischief”.
“This man was arrested for his Hindu hatred earlier – he also said ‘I wear shoes because impurities of Bharat Mata should not contaminate us.’ Bharat Jodo with Bharat Todo icons?” BJP’s Shehzad Poonawalla, while sharing the clip of their conversation on Twitter. The Congress, in turn, accused the BJP of running a “hate factory, alleging it has turned more desperate ever since the successful launch of the ‘Bharat Jodo Yatra’.
Rahul Gandhi met pastor George Ponnaiah at the Muttidichan Parai Church, Puliyoorkurichy where he camped for a morning break on Friday. In the video shared by several BJP leaders, Rahul Gandhi was heard asking, “Jesus Christ is a form of God? Is that right?” To which, the pastor said, “He is the real God.”Mr Ponniah went on to say, “God reveals him(self) as a man, a real person…not like Shakti…so we see a human person.”
“If meeting a controversial pastor, who is known for his visceral disdain for the majority community and their beliefs, Rahul Gandhi’s idea of “Bharat Jodo, then this Yatra is nothing but a sham. How can indulging faith supremacists serve the larger society and bring cohesion?” BJP’s Amit Malviya tweeted.
The pastor was arrested last year in July in Kallikudi, Madurai for a hate speech against Prime Minister Narendra Modi, Home Minister Amit Shah and other leaders. The Congress accusing the BJP of spreading “mischief”, saying the tweet shared by them bears no relation whatsoever to what is recorded in the audio. “An atrocious tweet from the BJP hate factory is doing the rounds. It bears no relation whatsoever to what is recorded in the audio. This is typical BJP mischief that has become more desperate after the successful launch of Bharat JodoYatra which is evoking such a huge response,” Jairam Ramesh tweeted. 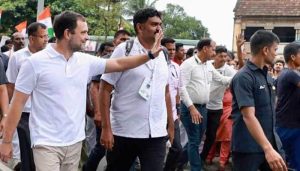 The Congress party’s ambitious ‘Bharat Jodo Yatra’ led by Rahul Gandhi began on Wednesday (September 7) from Kanyakumari. The Yatra will include Padayatras, rallies, and public meetings which will be attended by the senior Congress leaders including Sonia Gandhi and Priyanka Gandhi Vadra.

He slammed BJP for dividing the country and said, that this Bharat Jodo Yatra is like Lord Hanuman which will bring ‘Sanjeevani’ for the revival of the Congress party.”We are determined that this Bharat Jodo Yarta will be a huge success, it will create the new political culture and it will strengthen the Congress party organisation. India needs a strong vibrant Congress and the Bharat Jodo Yatra is Hanuman to create ‘Sanjeevani’ for Congress,” he added.
Taking to Twitter, Ramesh said that the video bears no relation whatsoever to what is recorded in the audio. “An atrocious tweet from the BJP hate factory is doing the rounds. It bears no relation whatsoever to what is recorded in the audio. This is typical BJP mischief that has become more desperate after the successful launch of Bharat Jodo Yatra which is evoking such a huge response,” he said in a tweet.
(Bureau Inputs with Media Report).