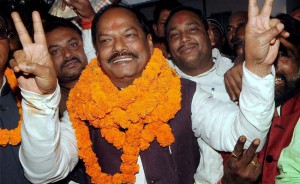 RANCHI: BJP leader Raghubar Das will be the next chief minister of Jharkhand, the first non-tribal leader in the state to hold the post. A formal announcement will be made shortly at a meeting of the party’s newly-elected lawmakers in state capital Ranchi, say sources.
The BJP and its ally, the All Jharkhand Students’ Union, had won the state polls, winning 42 seats in the 81-member assembly.
59-year-old Mr Das, a former deputy chief minister and BJP vice president, had been touted a frontrunner for the top job especially after three-time former chief minister Arjun Munda, considered the tallest tribal leader of the party, lost the elections from his stronghold Kharsawan. Another former chief minister from the party, Babulal Marandi who lost two seats that he contested, is also atribal leader.

Hence, the BJP is reportedly considering a tribal leader as deputy chief minister to placate the community which comprises around 32 per cent of Jharkhand’s population. Neelkanth Munda and Shiv Shankar Urav, sources say, are the likely contenders for the post. Mr Munda, sources add, is likely to be appointed a national vice president of the party.
Two senior BJP leaders, Health Minister JP Nadda and Vinay Sahasrabuddhe, will be the observers at today’s legislature party meeting to oversee the election of the new chief minister.”The party’s Parliamentary Board and the honorable Prime Minister will take a decision on this. But I wish to assure the people of Jharkhand and Jamshedpur that I would always be there to serve them,” Mr Das, 59, said on Tuesday soon after it emerged that the BJP-led coalition had emerged victorious.

Jharkhand has had nine governments and three stints of President’s Rule since it was created in 2000.In its election campaign, the BJP had promised a stable government in the state. It did not project a chief ministerial candidate and built its campaign around Prime Minister Narendra Modi and his development agenda. The PM had addressed several rallies in the state