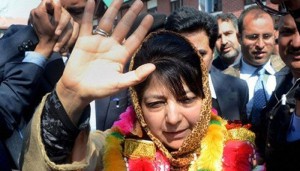 SRINAGAR: Peoples Democratic Party (PDP) leader Mehbooba Mufti Sayeed said on Tuesday that her party is not in a hurry and will take time in exploring possibilities to form government after it emerged as the single largest party in the state.
“We are not in a hurry to cobble up numbers. Will explore possibilities to give a credible govt,” Mehbooba told reporters here.”The priority is not to cobble (up) any government. The govt should have credibility. It should be able to deliver. We will do our best for the people of Jammu and Kashmir,” she added.
However, the PDP leader refused to say if her party would prefer to sail with the Bharatiya Janata Party (BJP), the second largest group in the house, or the Congress, a former ally.
“We are looking for a government which is based on an agenda… The agenda of good governance. It will take time to find out what are the formulations which can give good governance. We will take our time… We are not in a hurry,” she said.
Mehbooba, however, underlined that the Kashmir verdict was “a vote against both the NC (National Conference) and the Congress”.
The PDP chief further said she is thankful to people and Election Commission for a free and fair election.“Mandate is not decisive and below our expectations. Cobbling up new government will take time,” she added.
Earlier in the day, Sayeed emerged victorious from the Anantnag assembly constituency in Jammu and Kashmir.