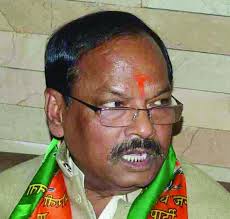 RANCHI: After Bharatiya Janata Party’s (BJP) massive victory in Jharkhand, the big question which is now being asked is – who will be the next Chief Minister? BJP’s parliamentary body is expected to meet on Wednesday to find an answer to this question and pick the most suitable and universally acceptable candidate to be the chief minister of the coal-rich state.
Since its formation, Jharkhand has always been ruled by a tribal face, but now it seems that the BJP under the Modi-Shah leadership has altogether different plans for the tribal dominated state.As per reports, Raghubar Das, Saryu Rai, Neelkanth Munda and Barkubar Jagrai have emerged as the strong contenders for the post.

However, some media reports claim that Raghubar Das, a non-tribal face is most likely to emerge as the winner.Commenting on the chief ministership issue, Das said that a final call in this regard would be taken by the party’s central leadership, including Prime Minister Narendra Modi.
Uncertainty has been the hallmark of Jharkhand politics with frequent change of political loyalties.Breaking from fractured mandates in Jharkhand in the past, BJP-AJSU alliance secured an absolute majority in the 81-member Assembly this time.
Out of total 81 Assembly seats, BJP won 37 seats while its ally AJSU Party secured five seats. JMM won 19 seats, Congress 6, JVMP bagged eight and Others managed 6.This is the third Assembly election in Jharkhand in its 14 years of existence but the state has seen nine governments interspersed with three periods of central rule.

The previous two polls were held in 2005 and 2009 and both voted hung assemblies. The state has so far been ruled by five tribal Chief Ministers – Babulal Marandi, Arjun Munda (thrice), Shibu Soren (thrice), Madhu Koda (once) and Hemant Soren (once and incumbent) during the period. There have been occasional voices within Congress and BJP to prop up a non-tribal Chief Minister in the state.