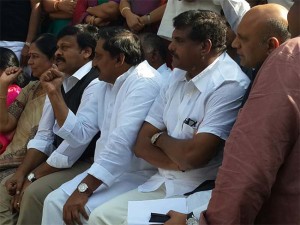 NEW DELHI : Andhra Pradesh Chief Minister Kiran Kumar Reddy has urged President Pranab Mukherjee to “use his powers” to stop the bifircation of his state to create a new Telangana state.
He met the President after sitting on a ‘dharna’ at Jantar Mantar in the heart of the capital this afternoon to protest against the move to split Andhra Pradesh  a move that he says has not been well thought through.
Mr Reddy, who belongs to what is known as the Seemandhra region, said he had explained to the President that people from both sides would be adversely affected by the division –  “People of Telangana will suffer tremendously due to lack of water; we will suffer severe electricity problems and lack of medical facilities.”
Last week, the Andhra Pradesh Assembly, led by Kiran Reddy, rejected the Telangana Bill causing considerable embarrassment to his party, the Congress, which also rules at the Centre. The Assembly sent back the bill seeking over 9000 changes.
The union cabinet will meet tomorrow to review the controversial proposal and once it approves it, the bill will be sent to the President and then brought to Parliament for a debate and vote. The Congress’ central leadership wants to bring the bill to Parliament on Monday, February 10, so that it can be passed in this session, allowing it to make electoral gains in Telangana in the national election due by May.
But Congress leaders from the Seemandhra region, including Kiran Reddy, want the opposite. They say that unless Andhra Pradesh goes to the polls undivided, they will be punished by voters. Lawmakers from the region disrupted Parliament today and have vowed to protest everyday. (Parliament’s last session begins with sparring over Telangana)
At his protest today, the Chief Minister was joined by other senior Congress leaders and central ministers like Pallam Raju, Chiranjeevi, Purandeshwari and JD Seelam.
YSR Congress chief Jagan Mohan Reddy too met the President to press for a united Andhra Pradesh.