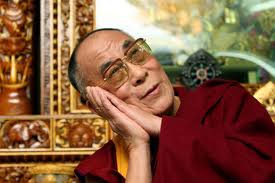 SHILONG : Daalai Lama Wednesday hoped the Chinese regime would find a genuine solution to the Tibet issue. However, he was unsure of returning to his homeland which he left for exile in 1959.
The Tibetan spiritual leader’s optimism rose from the fact that the new Chinese president Xi Jinping is going all out against corrupt practices and is sensitive towards the rights of the people in China’s countryside.
The Dalai Lama said today’s Chinese intelligentsia in mainland China is more receptive to the Tibetan cause.
“I think the present (Chinese) president Xi Jinping is quite active because he is cleaning up corruption quite courageously. He spoke about the rights of the countryside people, about proper rule of law and he used words ‘seeking truth from fact’. With that slogan, he actually opened the Chinese economy,” the Nobel laureate told journalists here.
The Dalai Lama, on the last leg of his three-day visit to Meghalaya, also recalled his meetings with chairman Mao Zedong in the late 1950s, in what was then Peking, on the Tibet issue.”I met chairman Mao in 1954-55 in Peking. He was like my father. I was there for five months and met several times and we developed a father-son relationship. Chairman Mao said on many occasions that Tibet cannot be treated as an ordinary Chinese province,” he said.
On his possible return to his homeland, the Dalai Lama who escaped to India in 1959, said: “Nobody knows (on my return to Tibet). But I think 99 percent of Tibetans are waiting for me to return to Tibet. They always ask me to return. I told them I am ready to go to Tibet, it’s my home, but the Chinese government won’t allow it.”
The 78-year-old Tibetan, who has considered India his second home, also disclosed that sometimes Chinese officials also urge him to return to Tibet. “At this moment if I return, it will be useful. Perhaps I may be more relaxed in prison, but with no work. I will not only lose my freedom but it will be just a waste of time. Here (in India), I am busy.”
Tibetan prime minister-in-exile Lobsang Sangay Tuesday was hopeful about the Dalai Lama’s return to Tibet via Tawang in Arunachal Pradesh, the route which he had used to come to India following his escape 55 years ago.
Commenting on India’s democracy, the Tibetan spiritual head said the Indian people take freedom without discipline, even as he emphasised on the development of rural areas across India.
“Some drawbacks are there and sometimes in a democracy, people take freedom without discipline. Freedom must combine with a sense of responsibility. Otherwise, India is a very nice country,” he said
“Development should take place in rural areas also, and not only in towns and cities. All villages should have schools and hospitals. Population must also reduce in big cities. Millionaires should not only happen in big cities but also in rural areas,” he said.