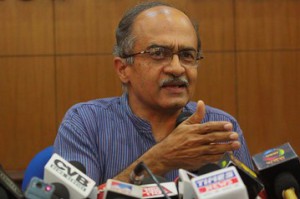 NEW DELHI : Activist lawyer and AAP leader Prashant Bhushan on Tuesday asked the Anti-Corruption Branch of the Delhi government to register an FIR against CBI Director Ranjit Sinha for “abusing” his authority and allegedly protecting some accused in the 2G and coal scams.
In a letter to the Anti-Corruption Branch, Bhushan said “enough evidence” against Sinha has come to the light.”Now the evidence has surfaced that Sinha deliberately tried to save certain influential persons from prosecution in the 2G scam, coal scam etc. By abusing his position as the CBI Director.
“It has also now come to the light that while Sinha was abusing his authority to save certain persons from prosecution, he was meeting accused/potential accused (or their agents/lawyers) in important cases being probed by the CBI, repeatedly at his residence without the presence of other CBI officers,” Bhushan said in his complaint.
However, CBI sources said that the complaint is an attempt to “malign the agency” as all the points raised by the complainant have been raised before the Supreme Court which has decided the matter.
Bhusan alleged that the CBI chief has committed several offences of bribery, which can established by a thorough investigation.”Therefore, I request you to kindly get this matter thoroughly and impartially investigated after registering an FIR,” Bhushan said.