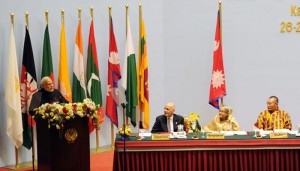 KATHMANDU: When Prime Minister Narendra Modi addressed the SAARC summit this morning, his assessment of the group’s accomplishments was frank. “As SAARC we have failed to move with the speed that our people expect and want. Nowhere in the world are collective efforts more urgent than in South Asia; and, nowhere else is it so modest,” Mr Modi said.
Barely an hour later, his concerns proved warranted. Pakistan blocked key proposals pitched by India to integrate energy grids and free up road and rail movement, seen as crucial for improving cross-border trade, which remains minimal between SAARC countries.
It was decided that no agreements would be signed, ensuring the first SAARC summit in three years has turned out to be a whopping non-achiever.
Three agreements had been prepared ahead of the summit, two on improving road and rail connections and one on making it easier for countries in the power-starved region to trade in electricity. None will proceed because of Pakistan’s objections. In its 30 years, the South Asian Association for Regional Cooperation (SAARC) has delivered negligible results for economic ties and development among its eight members – Afghanistan, Bangladesh, Bhutan, India, the Maldives, Nepal, Pakistan and Sri Lanka.
Despite a free trade pact since 2006, South Asian nations conduct only 5 per cent of their total trade with each other, and there are few transport and power links among them.
Experts agree that cooperation between New Delhi and Islamabad is key to the success of SAARC. This gathering comes just weeks after some of the worst cross-border violence in Kashmir – 20 civilians were killed last month. Mr Modi is holding meetings on the sidelines of the summit with all SAARC leaders except Mr Sharif.

The Pakistani Prime Minister has said the ball is in India’s court because Delhi cancelled talks earlier this year after the Pakistani envoy consulted Kashmiri separatists ahead of a scheduled dialogue between the Foreign Secretaries of both countries.