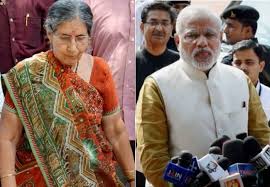 MEHSANA: In a small home in her village, Jashoda Chiman Modi is prepping for her daily visit to the local temple. When she heads out, she will be escorted by two security guards in civilian clothes carrying pistols. The 63-year-old retired school teacher filed an application yesterday seeking details of what sort of security she is entitled to as the wife of Prime Minister Narendra Modi.
“I filed a Right to Information application as I wanted to know what is the protocol for my security personnel. I feel inconvenienced when I have to travel in public transport and am followed by security in official cars,” she said in the village in Mehsana district, 120 km from the city of Ahmedabad.
Mr Modi has not commented on reports that he was 17 when he had an arranged marriage with Jashodaben. In earlier interviews, she has said after three years, in which they spent three months together, he left her and that the parting was amicable.
In April, in election papers declaring him a candidate for Parliament, Mr Modi wrote the name “Jashodaben” in a column regarding his marital status. He had left the column blank on previous occasions, including in the last Gujarat state election in 2012.
The Congress party had said that Mr Modi’s failure to acknowledge his marriage suggested that he does not respect women.After Mr Modi was elected in May, Jashodaben was given round-the-clock security; she is protected by 10 commandos, five per shift, provided by the Gujarat government.
Jashodaben has said that given that former Prime Minister Indira Gandhi was assassinated by her security guards, she is “frightened by the presence of security.” Her three-page RTI application asks the government to detail the rules and extent of the security cover she is entitled to as a member of the PM’s family.