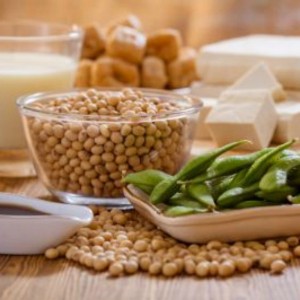 A new UK study says that soy contains substances that help combat bone loss and can protect against osteoporosis in women over 50.As women get older and go through menopause, they experience a drop in the level of the hormone estrogen which protects against bone loss.
This can make them particularly susceptible to osteoporosis, a disease which leads to 9 million fractures annually worldwide.
A research team from the University of Hull in the UK has concluded that a diet rich in soy protein and isoflavones (plant substances which act in a similar way in the body to estrogen) provides protection from bone weakening during menopause.

Their study was presented on November 1 at the Society for Endocrinology’s annual meeting in Edinburgh in the UK. It involved 200 women in early menopause. Over 6 months, they were each given either a daily supplement containing soy protein with 66mg of isoflavones, or one only containing soy protein.
The researchers then monitored the condition all of the volunteers’ bones by measuring the levels of 2 proteins in their blood.Their results indicated that the group of women who took the soy protein with isoflavones had lower levels of one of the 2 proteins, suggesting a slowdown in the rate of bone loss and in osteoporosis.
The scientists also noted that these volunteers had a lower risk of developing cardiovascular disease than the group of women who took only soy protein.
“We found that soy protein and isoflavones are a safe and effective option for improving bone health in women during early menopause. The actions of soy appear to mimic that of conventional osteoporosis drugs,” explained the lead researcher, Thozhukat Sathyapalan.
This study’s key result — the 66mg of isoflavone — can be found in a soy-rich Asian-style diet, the researchers say, whereas with a Western diet consumption is only around 2-16mg daily. The effects of this supplement remains to be tested on a larger group and over the longer term.
Tofu, soy flour, soybeans and miso are rich in isoflavones and their anti-cancer effects have already been demonstrated several times, including in the 1990s under the impetus of the National Cancer Institute in the US.