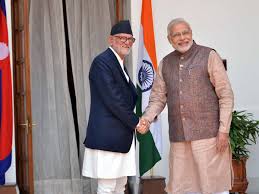 KATHMANDU: Prime Minister Narendra Modi today announced US $1 billion (Rs. 6,000 crore) as concessional line of credit to Nepal and proposed a “HIT” formula for the development of the land-locked country endowed with rich hydropower potenti Mr Modi announced this while addressing Nepal’s Constituent Assembly in Kathmandu on Sunday.
“This amount is separate from the previous assistance that India has already provided to Nepal,” said Mr Modi, who is the first Indian Prime Minister to visit the Himalayan nation in 17 years.
Earlier, India had provided US $250 million line of credit to Nepal through the Exim Bank of India.The new grant will be utilised for infrastructure development and energy projects as per Nepal’s priority, according to Nepalese Foreign Ministry.Proposing a model development formula for Nepal, Mr Modi said, “I want to HIT Nepal”, drawing wide applause from the lawmakers.
Elaborating his strategy, Mr Modi said HIT in his lexicon implies – Highways, I-ways and Transways.”It came to my mind that let’s hit Nepal. Many of you would take offence to my use of this term but when I talk of hitting Nepal, I have three main points in mind — H:Highways
I:I-ways and T:Transways,” Modi said.He said India will help Nepal in constructing highways for better connectivity. It will provide assistance to the country for developing information highways so that “Nepal should not be left behind among the nations of the world”. “Nepal too has to catch up with the digital age and it has to be connected to the world at large,” Mr Modi said.
Mr Modi also said that Nepal has abundant potential for developing its hydropower sector and for this purpose India is committed to establish transmission lines for the export and import of electricity.”I want to double the amount of electricity India is providing Nepal today so we have to lay the transmission lines as soon as possible,” the Prime Minister said, adding India wants to buy electricity from Nepal.
“This is my notion of hitting Nepal and you too would agree that it soon becomes a hit,” he said.Striking an optimistic note, Mr Modi said, “For now we will remove darkness here and a decade later Nepal will come to our help. This is our bonding”.He said borders between the two nations should not be a barrier, but act as bridges so that both can develop.
He said India and Nepal ties are as old as Himalayas and Ganga. The two countries share close cultural relationship.
He said India welcomes and respects the aspirations of a Nepalese Federal Democratic Republic.He said Nepal is a truly sovereign nation
“It is not our job to interfere in your internal affairs but to assist you in the path you have chosen,” he said. “Being your neighbour and seeing our experience as a democracy we feel happy at the direction in which you are going. Our only wish is that Nepal’s progress reaches as high as the Himalayas,” Mr Modi added.Praising the contribution of Gurkha soldiers in India’s defence, Modi said India has won no war without the sacrifices by Nepalese soldiers.”I salute those brave hearts who laid their lives for India,” he said.
Invoking Sam Manekshaw, the first field marshal in the Indian army, Modi said, “Any soldier who says I am not afraid of death would either be lying or Gurkha.”Modi said he is honoured to address Nepal’s Constituent Assembly and this is an honour for 1.2 billion Indian people.
This is the second time a foreign leader was addressing Nepal’s Constituent Assembly. Earlier in 1990, the then German Chancellor Helmut Kohl had delivered a keynote speech to the Constituent Assembly.with inputs from pti.