Past is Past, Makes a Pitch for Federalism: Modi 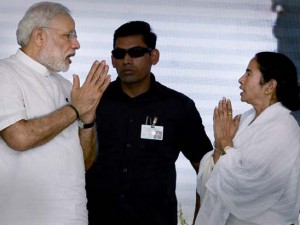 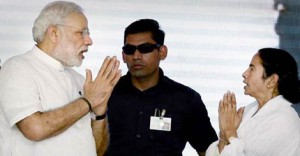 BURNPUR (W B): A day after a bout of public sparring with Bengal Chief Minister Mamata Banerjee, Prime Minister Narendra Modi said past was past and made a pitch for federalism. A fresh chemistry appeared to be in place between the two leaders, with Ms Banerjee, too, sounding upbeat.
“Past is part… It was election time, I was attacked and I attacked back during the elections,” he said. Bengal, he added, has been “discriminated against”. “I want Bengal to reach its former glory.”

Declaring how proud he was that the nation was getting the modern steel unit – for the inauguration of which the two leaders were in Burnpur — PM Modi said it would not have been possible without the cooperation of the state government.
“India will not change without a ‘Team India’. The Prime Minister and Chief Ministers are one Team that will take India ahead. The nation is bigger than any party,” PM Modi said.”The chief minister said a very good thing,” he said. “The Centre and state… the more they work together, the more we will progress.”
The federal structure of the country had always generated tension, he said. “The Centre thought it was special. I was a Chief Minister. I know. This attitude is not good.”
In her address, Ms Banerjee had said, “When we work together, the country progresses. The federal and central structure will both remain.”
She even reminisced about Trinamool Congress’s former association with his party. “In ’98, when the Trinamool Congress supported the NDA government, we had got a Bengal package,” she said. “We had demanded modernisation of IISCO. Today it is done.”
Yesterday, at the inauguration of three social schemes in Kolkata, Ms Banerjee had taken political potshots at the Centre, which the Prime Minister had deftly turned to his advantage.
Later, the two leaders had a meeting where Ms Banerjee even made a fresh pitch for a debt waiver for Bengal – a request that had earlier been turned down by the Modi government.
Earlier, thanks to the PM arriving early for the social welfare scheme event, the two spent time talking for about half hour. The opposition says it was a one-on-one. The BJP has denied that.