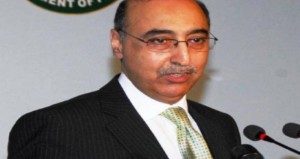 NEW DELHI : Pakistan seeks “friendly and cooperative relations” with all its neighbours including India, the country’s new high commissioner, Abdul Basit, said on Sunday.
Basit was speaking after unfurling the national flag at the mission here to mark Pakistan’s national day. Addressing a gathering, Basit stressed that Pakistan was determined to forge “friendly and cooperative relations” with its neighbours including India.
He underlined the significance of the composite dialogue process for settling all outstanding issues, a high commission statement quoted him as saying. Basit “also reaffirmed full solidarity of the Pakistani nation with their Kashmiri brothers and sisters”, the statement added.He said the people of Pakistan were determined to overcome their difficulties.