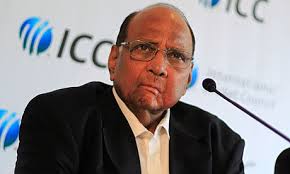 MUMBAI : Attacking Narendra Modi for being “narrow minded,” NCP chief Sharad Pawar today alleged that the Gujarat administration led by the BJP prime ministerial candidate filed a FIR against its own people for providing relief to drought-hit Maharashtra last year.
The Union Agriculture Minister said people from Gujarat had helped Maharashtra for 3-4 months with cattle feed in the affected areas during the last year’s drought months. “The Gujarat government has filed an FIR in the Mehsana district for extending the help,” he alleged, stating that the FIR has been filed on charges of “corruption.” According to Pawar, the FIR has been filed for diverting the feed stock, claiming that the feed was diverted when Gujarat was also facing drought.
“Those who have ambitions of running the country, don’t look at all the states as their own…How can someone with such narrow mind aspire to lead a country?” Pawar questioned, without naming Modi. Pawar said during the drought last year, people of Gujarat helped with the feed stock to special cattle shelters which were opened by the administration in Maharashtra.
The FIR has been filed at Mehsana North police station by one Shailendrakumar Doshi, a district registrar in Mehsana, the NCP chief claimed. Meanwhile, he also claimed that Modi does not know the country’s history very well.
He specifically pointed out an instance in Wardha last week, wherein Modi claimed that the “chale jaao” call was given from the town in Vidarbha famous for the Sevagram ashram. Pawar said that in fact the historic call was given from the August Kranti Maidan in Mumbai in August 1942 and both Gandhi and Jawaharlal Nehru were jailed for the same.
“Here we have a PM candidate who does not have a sense of history,” he said. The septuagenarian, who has decided not to contest the polls this year, also said that in his political career, there is no precedent of someone approaching the elections with a PM candidate like the BJP is doing.
It is the job of the elected MPs to choose a candidate within them to be the PM, Pawar said, explaining the tradition.