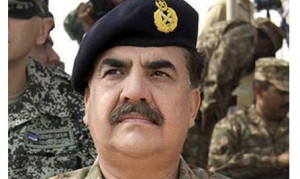 ISLAMABAD: Pakistan’s powerful army chief intervened publicly in the country’s political crisis late Thursday, agreeing to mediate between the government of Prime Minister Nawaz Sharif and protesters demanding his resignation, government and military officials said.The move follows a backroom political deal that government officials privately said ceded important powers over defense and foreign policy from the government to the military.
The military’s political intervention underscored the weakness of Pakistan’s democracy just 16 months after the country’s first democratic transition raised hopes that the civilian authorities would assert themselves over the country’s long dominant military.
Gen. Raheel Sharif will act as guarantor of a deal between the protesters and the government, protest leaders said. The military confirmed that Gen. Sharif—who is unrelated to the prime minister—met late Thursday with the two protest chiefs, sportsman-turned-politician Imran Khan and Muslim cleric Tahir ul Qadri. Several thousand of their followers have been in the streets of Islamabad since Aug. 15, calling for Mr. Sharif’s ouster.
Earlier Thursday Prime Minister Sharif met with the army chief in Islamabad, the prime minister’s office said, but it didn’t return calls seeking further comment. Other senior government officials weren’t immediately available to media.The government believes the military and its spy agencies have secretly supported the protests.The protest leaders said the army chief promised them that their grievances would be addressed within 24 hours. “The army will work out a formula, a total reform package,” Mr. Qadri told supporters in a speech.
After meeting the army chief, Mr. Khan said the military had pledged it would ensure an unbiased judicial investigation into his allegations that Mr. Sharif rigged the May 2013 elections. He said he told the army chief that the election probe couldn’t work unfettered while Mr. Sharif remained prime minister.”We have got very close to our goals,” Mr. Khan told supporters in a speech. “The only thing left is Nawaz Sharif’s resignation.”
Many observers saw the military’s public role in defusing a political conflict as marking a dramatic decline in the power of Mr. Sharif, who enjoys a solid majority in parliament.”This is an effective transfer of power from the politicians to the army,” said Fawad Chaudhry, an analyst who was an adviser to the prime minister of the previous elected government. “Just two weeks ago, Nawaz Sharif was a very powerful prime minister. Now, whatever happens, he will never be strong again.” 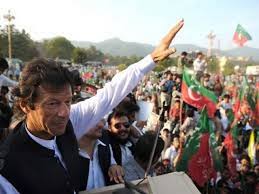 Mr. Chaudhry predicted that even if Mr. Sharif’s government survives the next few days, early elections were likely as he wouldn’t be able to serve out his five-year term after this “humiliation” in recent days.Government aides said the military had already used the pressure of the protests to force the administration in the last few days to give up control of foreign policy and security affairs, traditional domains of the armed forces in which they saw Mr. Sharif taking independent stances. Analysts described the government’s ceding of control of key policy areas as a “soft coup” staged by the military.
Mr. Sharif had promised to pursue a peace deal with India, which could have ended a fierce nuclear-armed rivalry in the region and told Kabul he would end Pakistan’s interference in Afghanistan. Officials said those policies amounted to red lines for the military establishment.
“The army chief should not be acting as a mediator between politicians. He’s there for war, or defense of the country,” said Kamran Shafi, a newspaper columnist. “If I were prime minister, I would call a snap election now and put everyone in their place, including the army.”Prime Minister Muhammad Nawaz Sharif
In a further blow to the government, Pakistani police said Thursday that they had launched murder cases against Prime Minister Sharif and several other high government officials. The charges relate to the killing by police in June of at least 10 followers of Mr. Qadri, the protest leader, who claims the killings were ordered from the top.

The government agreed to the charges being laid but has insisted that no senior officials gave the orders to shoot Mr. Qadri’s supporters. That investigation could lead to the resignation of the prime minister’s brother, Shahbaz Sharif, who is chief minister of Punjab province, where the killings happened, government aides said.
The government’s relations with the military became particularly strained over Mr. Sharif’s decision to put on trial for treason the former army chief, Pervez Musharraf, who led the 1999 coup that ended Mr. Sharif’s previous tenure as prime minister. Though Gen. Sharif was appointed army chief by Mr. Sharif, the general looked up to Mr. Musharraf as his chief patron in the military, said security officials.
A range of other issues had further frayed civilian-military ties. The government’s choice of a defense minister who was a known critic of the military and its support of a private television station that broadcast allegations that the military’s spy agency was behind the shooting of the channel’s star news anchor were perceived as an affront to the military establishment.
One adviser to the military said that the armed forces eventually concluded that Mr. Sharif was a “national security risk” and had to be ousted. But in the recent standoff, security and government officials said, the military appeared to have chosen a softer option of curtailing Mr. Sharif’s powers.