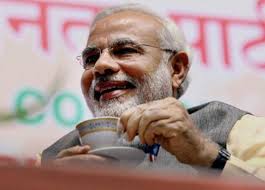 NEW DELHI : At his Sunday’s tea party, Prime Minister Narendra Modi asked the 400-odd NDA parliamentarians to rise above politics and remind people that the government was on the side of the economically deprived.
The move is expected to act as a balancing factor to the recent host of pro-development reforms. “Let us think far. Let us think big. Let us think above politics to chart a new course for the country,” the Prime Minister reportedly told the MPs. Related Alliance Talks on Track, BJP to Formalise Chief Ministerial Candidate Maharashtra’s BJP Lawmakers to Elect Their Leader on Tuesday PM Narendra Modi Lauds Hrithik Roshan For Joining Clean India Drive The MPs, he said, should maintain connect with the people over the Clean India campaign.

They were also asked to visit schools in their area over a five-day period beginning November 14 – the 125th birth anniversary of India’s first Prime Minister Jawaharlal Nehru. “Take to the people the work done by the NDA government for the welfare of the poor. Explain the importance of hygiene to children,” one of the MPs quoted the Prime Minister as saying.
This was Mr Modi’s first meeting with the MPs after he assumed office in May – last week he held a dinner meeting with his ministers. Other ministers also briefed the gathering on the schemes and initiatives of the government. Union Finance Minister Arun Jaitley spoke about the Jan Dhan Yojana, the recent coal ordinance, gas pricing and diesel deregulation. Rural Development Minister Nitin Gadkari spoke about the Saansad Adarsh Gram Yojana and Labour Minister Narendra Tomar briefed the MPs about the initiatives taken under the Shramev Jayate Karyakram. Parliamentary Affairs Minister Venkaiah Naidu read the MPs the Riot Act over the coming Winter Session.
NDA parliamentarians, he said, should maintain 100 per cent attendance, prepare for and raise the quality of debates and mind their conduct. “There should be no complaint of questionable conduct,” he reportedly said. BJP veteran LK Advani and party chief Amit Shah addressed the MPs too.
Those observing the meeting for signs of a re-union with Shiv Sena for the government formation in Maharashtra, however, were in for a disappointment. With the BJP falling short of majority by 22 seats, a reunion with the Sena is on the cards. A contingent from the Shiv Sena – which is still an ally at the Centre – attended the event, led by the party’s sole Union minister, Anant Geete