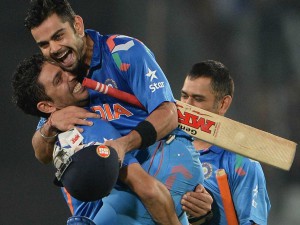 NEW DELHI : Virat Kohli has received a vocal boost from the former pin-up boy of Indian cricket, Yuvraj Singh. Kohli, who will lead India in the upcoming ODI series versus Sri Lanka in the absence of Mahendra Singh Dhoni, is the future of Indian cricket, said Yuvraj, who last played for India in a T20 international in April 2014.

In an interview to Indian Express, Yuvraj called Kohli an “angry young man” who hated to lose. Kohli, who was in horrendous form on the tour of England but bounced back during the curtailed West Indies series at home, is seen by many as India’s next captain. “He is an angry young man.
He is more aggressive when he is the captain and the team is losing. I see great potential in Kohli. He is outstanding when it comes to work ethic and focus,” said Yuvraj. He may not be in the Indian team, but Yuvraj remains a ladies man. Linked with Bollywood actresses, Yuvraj has grabbed headlines with his activities both on and off the field.
The 2011 World Cup hero has defended Kohli, who was in the eye of a storm for his links with actress Anushka Sharma during the England tour. “The Australians, South Africans, English or other teams all travel with WAGS, then why should India be singled out.
And if you see other sports, be it football or tennis, WAGS accompany respective players during the matches or tours. “Where were the critics when Virat was shining and doing everything right. A year back, Virat was all over the news for his cricket success, the same critics were praising him that time.
I do not think much about it. A player knows what he is doing and he would always keep his form and game a priority,” said the left-handed all-rounder, whose last ODI for India was in December 2013 in South Africa. Yuvraj said he was working hard on his comeback and his guru Sachin Tendulkar was helping him. “Sachin has been my mentor and a guide.
He has been by my side always. Since I was a kid, I used to follow Sachin Paaji. I looked up to him and still do. I make sure I keep in touch with him. “A fortnight back, I was in Mumbai at the MCA ground training with him. He is helping me out with my form. He has been telling me to stick to my original game and look for big knocks,” said Yuvraj. Currently, Yuvraj is assisting the North Zone side in their Duleep Trophy match against Central Zone in Mohali.
He scored 47 in the first innings and bowled just four overs. North Zone skipper Gautam Gambhir slammed a big century in what is turning out to be a big-scoring game. Yuvraj is keen to start his academy and has not ruled out a career in films. His father, former Test quickie Yograj Singh, is a relatively well-known Punjabi film actor.