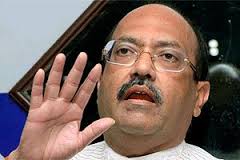 LUCKNOW : Former Samajwadi Party (SP) general secretary and Rajya Sabha member Amar Singh has dismissed speculations about his return to the party fold.
Pointing out that he will never “again fall in the Samajwadi trap”, the leader also announced late Wednesday that he would be distributing blankets to the riot victims at relief camps in Muzaffarnagar on his birthday Jan 27.
Taking on the SP leadership, which he pointed out had accused him of bringing glamour to the party, Singh questioned the Saifai festival glitz in which several film stars, including Salman Khan and Madhuri Dixit, participated.
Singh said the SP government in Uttar Pradesh had miserably failed in ensuring safety and governance. He alsodenied that the Akhilesh Yadav government had withdrawn the money laundering case against him.“This is factually incorrect. The case was withdrawn during the regime of Mayawati itself,” he said.
He criticised Samajwadi Party’s general secretary Ram Gopal Yadav and Urban Development Minister Mohd Azam Khan, both his arch rivals while he was a party member. But he praised PWD minister and the chief minister’s uncle Shivpal Singh Yadav.
“I have very old personal association with Shivpal Yadav and that would continue,” he added. Singh used to be a prominent leader of the party and was seen as the most trusted aide of party chief Mulayam Singh Yadav for several years until the two parted ways and Singh was thrown out of the party a few years ago.
He later formed Rashtrya Lok Manch, a party that unsuccessfully contested on many seats in the 2012. Singh has since been lying low, largely due to health issues.