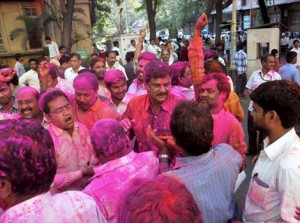 HYDERABAD : As K Chandrasekhar Rao or KCR arrived to a hero’s welcome in Hyderabad today, his Telangana Rashtra Samithi made it clear that it finds itself under no obligation to merge with the Congress. Senior TRS leader and KCR’s son KT Rama Rao said, “We are not obliged to either merge or even have a pre-poll alliance with the Congress.” He had earlier said that a decision would be taken only after Telangana is formally formed.
For the Congress, which has predicated much of its Telangana gamble on the TRS’ reported promise of a merger, this is an awkward moment. It pushed for carving out Telangana, India’s 29th state, out of Andhra Pradesh in the face of much opposition from the Seemandhra region which will form the residuary state.When KCR left Hyderabad three weeks ago to attend the last session of the 15th Lok Sabha in Delhi, he told his supporters that he was leaving Andhra Pradesh, but would return to Telangana.
Telangana is now just a signature away from being a state and hundreds of jubilant supporters crowded the streets as the TRS chief landed in the city today. He will lead a victory procession to Gun Park Martyr’s Memorial, crossing the chief minister’s office that he hopes to occupy in a few days. It is expected to be a massive show of strength.It is also holding TRS to its promise that it would merge with the Congress once Parliament passed the bill.
The Congress’ Digvijaya Singh has indicated that talks for a merger of the TRS with the Congress are in the final stages. But KCR insists he has not even discussed the shape of the proposed deal with the Congress.
TRS leader B Vinod said over 90 per cent of his party wants it to remain an independent political entity. The TRS, they argue, is on a strong wicket with local legislators from other parties now wanting to join.While the TRS claims to be the party that has spearheaded the movement for a separate state over the last 13 years, the Congress credits Sonia Gandhi with Telangana.
The BJP has also earned some goodwill for having helped pass the Telangana Bill and its leaders hope that will mean some electoral benefit.In Delhi, KCR had also met BJP president Rajnath Singh. He described it as “thanksgiving” visit, but it was seen as a signal that the TRS is keeping its post-poll options open.