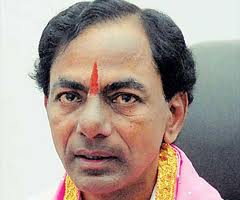 NEW DELHI: Digvijaya Singh today claimed that the K Chandrasekhar Rao’s Telangana Rashtra Samiti, or the TRS, has indicated its willingness to merge with the Congress, and that only the details of the deal needed to be worked out.
“TRS has indicated a merger with the Congress. Details of the merger are being worked,” Mr Singh, who is the AICC general secretary in-charge of Andhra Pradesh, was quoted as saying by the Press Trust of India.KCR, as Mr Rao is fondly called by his followers, had met senior Congress leaders Sonia Gandhi and her son Rahul, besides Mr Singh, to thank them for taking the initiative in pushing the bill creating Telangana through in Parliament during its concluding session. The Congress-TRS merger proposal was also, sources said, discussed in these meetings.
But KCR, sources in the TRS pointed out, has contradicted the Congress stand, and insists that they have not even discussed the shape of the proposed deal with the Congress. TRS leaders, including KCR’s son KT Rama Rao, have said a final call on the subject will be taken only after Telangana is formally formed. TRS leaders like B Vinod say over 90 per cent of the cadre want TRS to retain an independent political entity, and they only want an alliance with the Congress.
KCR had also met BJP president Rajnath Singh in Delhi, describing it as a “thanksgiving” call, but many political observers read in it a political calculation on the part of the TRS to keep its options open, post-elections.
After its separation from the residual Andhra Pradesh, Telangana would have 17 Lok Sabha seats. In 2009, the TRS could only win two seats, and the Congress cornered the lion’s share (12). But the TRS has claimed credit for the formation of the new state, and wants the Congress top brass to anoint Mr Rao as the first chief minister of India’s 29th state.