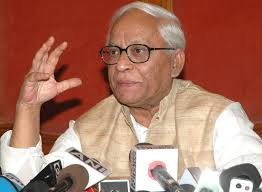 KOLKATA:  Former West Bengal Chief Minister Buddhadeb Bhattacharjee’s speaking to inquiry Commission about police shoot out on Congress protestors led by Mamata Banerjee on 21 July, 1993 around Writers’ Buildings today landed his already troubled party CPI(M) in a much bigger electoral soup.
Then Bhattacharjee, who was next most important minister after former chief minister late Jyoti Basu, was “suspected to have ordered the police shooting’’ on protestors leaving several Congress activists dead.
Today while speaking to the Commission, he said: “The protestors actually wanted to lay a siege on Writers’ Buildings with an aim to forcefully take over the secretariat…the movement was irresponsible and not open to reasonable restraints…and left Calcutta Police with no option but to shoot….’’
When asked if the then Government ordered any judicial probe, he said: “On the basis of police report which reached the Writers’ in time we found it wasn’t necessary….’’
Now, since Trinamool Congress was formed since 9th December 1998, after Mamata Banerjee split up State Congress, she hijacked the day from former and every year celebrated the day as Martyr’s Day with big rallies and always vowed that once she take over the Writers’ she would order an inquiry into the shoot out.
While other party leaders who was asked to give their versions about the shoot out recently “unconditionally regretted the shoot out and killings of Congress activists on 21st July,’’ and leaders included Biman Basu, state CPI(M) secretary and a senior Politbureau member!
First to react to Bhattacharjee’s version of the State Government’s stand was state Congress which called his statement in the Commission as “unfounded and biased justifying Government sponsored cruelty.’’ Pradeep Bhattacharya, state Congress’ big boss saying this also added “We could never forgive CPI(M) for the shoot out,’’ though TMC leaders did not react immediately, but when they would they would certainly paint the former CPI(M)-led Left Front as “bloody Devil who never hesitated to kill like Stalin any protestors.’’
The party which is pushed to a crisis point after its rout in 2011 Assembly election, Bhattarjee’s statements would might even create fear in the minds among the Left Front partners like RSP, Forward Bloc and CPI who have no electoral prospect.
The effect might as well have its echo on the Left proposed Third Front: “The party which blames others and say that its hands are clean, would not have it again to show,’’ quipped a senior state CPI(M) leader though “as such Bhattacharjee did not hesitate to reveal the then state Government’s mind set, but timing is certainly inopportune,’’ he added. It is likely to bring more trouble for the party in 2014 LS election in West Bengal, also felt a senior RSP leader.