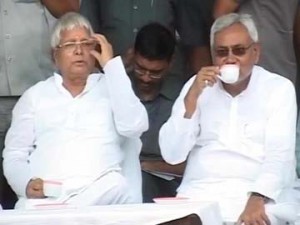 NEW DELHI:  In Bihar’s mega reunion, Nitish Kumar and Lalu Prasad Yadav, both in white, today smiled widely, clasped each other’s shoulders, held hands and sipped tea on stage in Hajipur, where they will address the first in a series of joint public rallies to be held in the next few days.
The two former chief ministers of Bihar, bitter political rivals for over 20 years, have been brought together by the common need to keep the BJP from posting yet another big win in the state after almost sweeping it in the general elections two months ago.
At stake this time are 10 assembly seats for which by-elections will be held later this month – Nitish Kumar’s Janata Dal – United and Lalu Yadav’s Rashtriya Janata Dal will contest four seats each and the Congress will contest two. These by-elections are being seen as testing grounds for assembly elections due next year.
There has been intense curiosity in Bihar on whether Mr Kumar would indeed campaign along with Mr Yadav; his political career in the last two decades has been built on denouncing what he called the “jungle raj” of Lalu and his party, whom he ousted in Bihar in 2005.
Both leaders had skipped the announcement of the alliance. Soon after the BJP won a handsome mandate in the general elections to form government at the Centre in May this year, Nitish Kumar had quit as chief minister of Bihar, owning responsibility for his party’s crushing defeat. The BJP, which was dumped by Mr Kumar in June last year ending a 17-year-partnership, won 31 of the state’s 40 seats along with its allies. Mr Kumar’s JD(U) could win only two seats.
Floundering and hit by desertions in the state assembly, Mr Kumar was offered help by Lalu Yadav, who now also supports the JD(U) government in Bihar.
Mr Kumar and Mr Yadav were once prominent young leaders in the Janata Party in the 1970s before launching their own political parties.