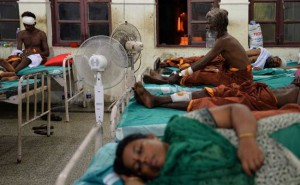 The NHRC also asked the Chief Secretary to apprise of the steps taken by the state government to ensure that such incidents do not occur in future.
The Commission also observed that the life of hundreds of people was at risk by such an event organised by the Temple authorities, who despite having been denied the permission decided to go ahead with the event.
It said the contents of the media report indicate that the District administration remained a mute spectator and was negligent in the prevention of such violation which is a serious issue of violation of right to life of the victims.