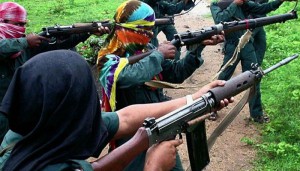 NEW DELHI: The Union Home Ministry has warned that some political leaders may be attacked by Maoists.The MHA has warned that BJP MP Giriraj Singh and rebel TMC MP Mukul Roy may be under the radar of CPI(Maoists), as per India Today report.
The ministry is said to have alerted the West Bengal government of the same.Meanwhile, with Maoist violence continuing unabated, the Centre has called a meeting of chief ministers of seven Naxal-affected states on November 3 to chalk out a strategy to fight the menace.
The meeting, to be chaired by Union Home Minister Rajnath Singh, will discuss overall Left-wing extremism (LWE) scenario in 35 worst-affected states in the seven states – Chhattisgarh, Jharkhand, Bihar, Andhra Pradesh, Maharashtra, Odisha and Telangana – besides issues like inter-state coordination, as per pti Report.

The day-long meeting will formulate plans on how to maximise the use of around 1,10,000 paramilitary personnel currently deployed in Naxal-hit states, monitoring of pilferage of explosives and IEDs (improvised explosive device), rehabilitation of family members of persons killed in LWE violence and investigation of important cases against the naxalites with the NIA and state police forces.

Apart from the security issues, the Home Minister and the chief ministers will also take stock of the overall development initiatives taken in the LWE affected areas.