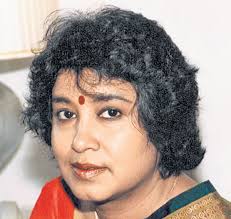 +NEW DELHI: Taking a dig at some Muslims for their unhappiness over the closing down of prayer rooms in some German universities, renowned Bangladeshi author Taslima Nasreen has said that prayer rooms at public places like schools, offices, airports and market should also be banned.
“Some German universities closed down prayer rooms. Good decision. Muslims are angry. Actually they are the only people who pray. No school, college, university, library, office, airport, station, market should have prayer rooms. Pray at your home if you have to,” tweeted Nasreen.
In the series of tweets, she also said that time has come for Muslims to reduce the number of daily prayers to 1 from 5 at present.”Ppl used to pray 50 times a day. Prophet went to the heaven by a winged horse & met god, asked him to reduce 50 to 5. Now time to reduce 5 to 1,” Taslima tweeted.
The 53-year-old author has been critical against ‘religious intolerance’ and women’s rights in India and her own country Bangladesh. Hitting out at ‘hardcore Islamists’ after the beheading of a Hindu priest in Bangladesh, she has claimed they don’t want Hindus in their country.
Taslima hails Kerala judge for asking ‘why Muslim women can’t have many husbands’On the recent attack on a Tanzanian student in Bengaluru, she said, “People are racists in the sub-continent.I think people in India, Bangladesh and Pakistan hate black skin.”