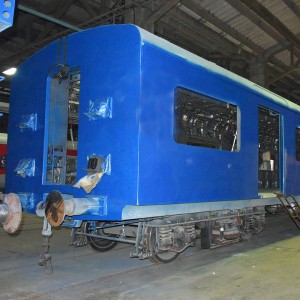 MUMBAI: The construction of the first air-conditioned local train for Mumbai is progressing at a brisk pace at the Integral Coach Factory Chennai with officials there telling dna that it should be ready to be sent to Mumbai in a month’s time.
As first reported by dna, the air-conditioned train has its electrical systems supplied by Bharat Heavy Electricals under a Transfer of Technology (ToT) agreement with Netherlands-based railway major Strukton Rolling Stock.
The firm, based out of the Dutch city of Alblasserdam, has designed and manufactured the Traction Control (oversees the working of the electrical system), the all-important Train Control and Management System (TCMS) as well as electrical systems to power the train lighting, air-conditioning, on-board passenger services etc.

The air-conditioning itself will be a novelty on this train with Indian Railway opting for the most powerful air-conditioning mechanism ever in any Indian train. At 15 tons each, these air-conditioners- called Roof-Mounted Packaging Units (RMPU) in rail lingo- will be much more effective than the 10 ton RMPUs- the highest on Indian Railway currently- installed in the newly-built double-decker rakes and some trains of Kolkata Metro.
Most of the trains on Indian railways, including the Rajdhani, have RMPUs of 7 tons, said officials.These new features will however mean that the new rake, once it is sent to Mumbai, will have to be tested more extensively than other rakes.
“It is a totally new product and chances of it being tested for upwards of three to four months cannot be ruled out. If that is the case, then there is a possibility that the train might be commissioned by the start of 2016,” said a senior railway official.