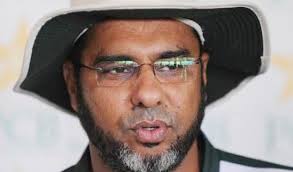 KARANCH:  Former skipper Moin Khan, who was recently sacked as the manager of the national side, has emerged as a strong candidate to be appointed head coach of the Pakistan cricket team.
The coaching committee of the Pakistan Cricket Board (PCB) will meet in Lahore to discuss the list of candidates, who have applied for the posts of head coach, batting and fielding coach. The committee that includes former captains, Wasim Akram, Javed Miandad and Intikhab Alam and the chief operating officer of the board, Subhan Ahmad will recommend the names for the coaching posts to the PCB chairman.
According to PCB sources, Akram has recommended Moin’s name to the board to appoint him as head coach for the upcoming Asia Cup and World T20 Cup in Bangladesh. “Akram is a strong supporter of Moin but wants the Board to only appoint him for a four month period since there is no international commitment of the Pakistan team until next October,” the source said.
He said former fast bowler Waqar Younis, who had also coached the national team in 2010 and 2011, was another strong candidate but might not be supported by Akram. “The indications are that Akram and Miandad would support the appointment of Moin while Intikhab and Subhan could recommend Waqar’s name. The interesting thing is that even the present bowling coach of the national team, Muhammad Akram is not in favour of appointing Waqar and wants Moin. Akram and Moin share a close rapport and the former is also using his contacts to push for Moin’s recommendation as head coach,” the source added.The source even said that Test captain Misbah-ul-Haq and ODI captain Muhammad Hafeez preferred to have Moin over Waqar. The other former cricketers who have applied for the post are Ijaz Ahmed, Basit Ali, Asif Mujtaba, Jalaluddin and Mohtashim Rasheed.