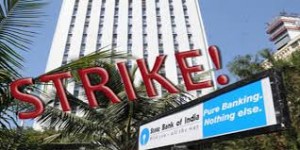 NEW DELHI : Operations at public sector banks are likely to be impacted as employee unions have decided to go on a two-day nation-wide strike from Monday to press for wage revision.
During the conciliation meeting held on February 6 before the Chief Labour Commissioner, the IBA did not come up with any improvement in the wage offer of 10 per cent hike in the pay package, United Forum of Bank Unions (UFBU) Convener M V Murali told Reporters..
As conciliation proceedings remained inconclusive, he said, UFBU has decided to go on two day nation-wide from February 10.Banks including country’s largest lender State Bank of India have informed customers in advance about the likely inconvenience they could face due to the strike.
Private sector players such as ICICI Bank, HDFC Bank and Axis Bank are expected to function normally. All India State Bank Officers’ Federation and All India State Bank of India Staff Federation, being part of UFBU will also participate in the strike, SBI said in a statement.
General Secretary of National Organisation of Bank Workers, Ashwini Rana said as the offer made by bank management is not in line with the rising inflation, the unions are compelled to protest.
Staff of public sector banks had gone on a day’s strike nationwide on December 18, after the discussions with IBA on wage revision had failed on December 14. The wage revision of public sector bank employees has been due since November 2012.
UFBU is an umbrella organisation of nine bank employees and officers unions.There are 27 public sector banks in the country with employees strength of about 8 lakh. There are about 50,000 branches of these banks across the country.