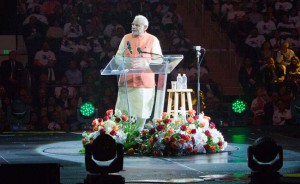 NEW YORK: Narendra Modi, the prime minister of India, sold himself on Sunday as a onetime tea vendor who wanted to lift India to glory by cleaning up the country, clearing the way for business and preparing its young citizens to be the workforce of an aging world.
His speech at Madison Square Garden telegraphed a wish list on the eve of his first meeting with President Barack Obama, while also deftly rallying an influential diaspora to his side. Modi addressed a wildly enthusiastic, largely Indian-American audience at the arena, and played skillfully to their sentiments.
He reminded the crowd of the taunts they had heard for years that India was a land of snake charmers, and he offered lavish praise for their success in the United States. (At ‘Modison’ Square Garden, I Thank You, Says PM) Related India’s Prime Minister Fills Arena With Fans PM Modi Expresses Grief Over Japan Volcano Eruption PM Modi to Pitch Brand India to Top CEOs Today His remarks were directed equally at the folks back home, where Modi won a sweeping electoral victory in May, and at US officials and investors he is wooing.
In an hourlong speech that was signature Modi, complete with rhetorical flourishes, soaring arms, and a good deal of snarkiness, the prime minister made fun of those who say he lacks “big vision.” “I tell them, ‘My friends. I came here selling tea,'” he said, and paused, as the audience leapt to its feet and clapped. “I’m a small man. My mind is busy doing small things.” (For PM, Audience Roared, Clapped, Cheered: Foreign Media) Modi’s visit comes at a time when India and the United States are each seeking big things from the other. Theirs was supposed to be what Obama once called the defining “partnership” of the 21st century. The relationship has withered since then, though, and both Washington and Delhi are trying urgently now to repair it, showering each other with the diplomatic equivalent of champagne and roses during Modi’s five-day visit to America.
(Rs. 10 a km For Auto Ride, Rs. 7 a km For India’s Mars Mission: PM Modi) He has met with two mayors and three governors, and his event at the Garden was attended by more than two dozen members of Congress. He is scheduled to meet on Monday with 11 chief executives from companies like Boeing,
Google and Goldman Sachs, and then to speak at the Council on Foreign Relations. (Lifetime Visas for PIO Card-Holders, Announces PM Narendra Modi in New York) An intimate dinner is planned with Obama on Monday evening (although Modi’s aides have let it be known that he is fasting for a Hindu festival called Navratri), as well as lunch Tuesday at the State Department and tea with House Speaker John Boehner.
His itinerary also includes a meeting with Hillary Rodham Clinton. Modi is here to sell a new New India, with himself as the man who can be trusted to deliver on its promise. But it remains to be seen whether he is willing or able to bridge India’s wide differences with the United States on tax policy, climate change, outsourcing, intellectual property rights and other issues.
Nor has India proved to be a trusted partner (India avoids the word “ally”) on US foreign policy priorities, including the conflict in Syria. R. Nicholas Burns, who was a top State Department official in the administration of George W. Bush, put the question this way: “Can we reset, reboot, revive – use your word – this relationship? We have to.”