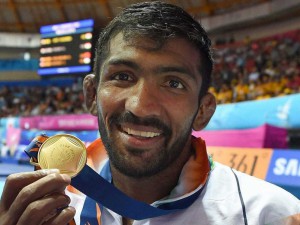 INCHEON: London Olympic bronze medallist Yogeshwar Dutt ended a 28-year gold drought for India in wrestling as he accounted for the country’s fourth yellow metal in the 17th Asian Games after beating Zalimkhan Yusupov of Tajikistan in men’s 65kg freestyle here on Sunday.
(Day 9 Blog | Medal Tally) This is India’s first Asian Games wrestling gold since 1986 when Kartar Singh won it in Seoul. However, both Satywart Kadian and Babita Kumari lost out on third-place finishes as they went down in men’s 97kg freestyle and women’s 55kg freestyle.
Yogeshwar was the star performer of the day as he bettered his 2006 edition bronze in style with a couple of splendid bouts. The Indian, who was trailing all through in his semifinal bout before coming good in the last few seconds to enter the final, picked up the yellow metal in style. He though had to toil hard in a gruelling final with his rival Yusupov defending extremely well.
Yogeshwar tried to pin his opponent down time and again but failed in his efforts. “It is a very important medal for me. I want to dedicate this medal to my father. I could not win a gold in 2006, the year he died, just two days before I left for Doha. In 2010, I was injured but in 2012 I fulfilled his dream of an Olympic medal. Now comes the Asian Games gold.
I owe it to him,” an emotional Dutt told NDTV. “My father would have loved to see me win these medals, so these are all for him.” Yogeshwar won his first point at the end of the opening period. In the second period, he managed to earn two more points to get a 3-0 verdict in his favour. (Tennis: Yuki Gets Men’s Singles Bronze | Sania Settles for Women’s Doubles Bronze) Earlier, Yogeshwar, having beaten Jinhyok Kang of North Korea 3-1, a decision by points, in his quarterfinal bout, clashed with Yeerlanbieke Katai in the last four stage.
A dominant Chinese was leading throughout the game before the Indian turned the bout in last few seconds. Yogeshwar was trailing 7-9 before he managed to pin down his opponent in the dying minutes of the match to win 5-0 in a ‘victory by fall’ verdict. Meanwhile, Satywart was beaten comprehensively by Mamed Ibragimov of Kazakhstan 0-3 in the bronze-medal match. Satywart, who lost his quarterfinal bout to Magomed Musaev of Kyrgyzstan 1-3 in a ‘decision by points’ verdict, could make it to the repechage round as his opponent reached the final. In his repechage, Satywart proved too strong for Pakistan’s Bilal Hussain Awan, who he defeated on great technical superiority 12-0 to make it to the bronze medal play-off.
On her way to the semifinals, Babita first defeated Cambodia’s Srey Mao Dorn 5-0 in a victory by fall verdict in the Round of 16 and then got the better of Aiym Abdildina of Kazakhstan 3-1 ‘decision by point’ verdict to make it to the semifinals. In the last four stage, Babita had an uphill task as she faced the 15-time World Champion Saori Yoshida of Japan.
As expected, the Japanese, who is three-time Olympic gold medallist, proved too strong for the Indian. Although Babita tried her best but Yoshida beat 4-0, winning on great superiority (a difference of 10 points) 14-4. But in the bronze-medal round, Xuechun Zhong of China downed Babita 3-1. However, Jyoti was thrashed by Mongolia’s Ochirbatyn Burmaa in a 0-4 ‘Great Superiority’ verdict in the quarterfinals of the Freestyle 75kg to crash out of the event.