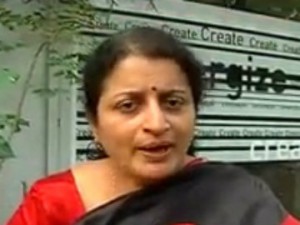 MUMBAI : Kavita Karkare, wife of former Maharashtra Anti-Terror Squad chief Hemant Karkare who died fighting terrorists during the 26/11 attacks in Mumbai, has been admitted to a hospital and is critical.
According to the Press Trust of India, Mrs Karkare has slipped into coma after a brain haemorrhage. “Kavita Karkare had a brain haemorrhage because of which she was taken to Hinduja Hospital at Mahim on Saturday. Her condition is critical and she is in coma. Her treatment is underway,” a police officer was quoted as saying. Mrs Karkare has been in the news for demanding better weapons, training and facilities for police personnel after her husband’s killing.
Hemant Karkare was killed by terrorists near Mumbai’s Cama Hospital, along with Additional Police Commissioner Ashok Kamte and senior police inspector Vijay Salaskar.