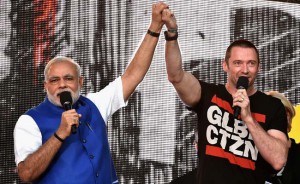 NEW YORK: Prime Minister Narendra Modi today addressed the Global Citizen Festival at Central Park in New York where he pitched for healthcare, clean water and sanitation for all. (Onus of Bilateral Talks on Pakistan, Says PM Modi at UN) Wearing a blue Nehru jacket over a white kurta, Mr Modi began his speech in English. “How are you doing New York?
I hope you are having a good time. Namaste. I am truly delighted to be here in the open Central Park among the youth, and not inside a closed conference room, because you are the future. What you do today, will decide our tomorrow,” he said while addressing a gathering of nearly 60,000 people. (‘G-All’: New Modi-ism in UN Address) Praising the campaign’s initiative to eradicate poverty, PM Modi said, “You are touching the lives of those who are not fortunate like you.
What an admirable act this is.” “Among you, I feel confident about the future of human beings. Some believe that the world changes with the wisdom of the old. The world changes with the idealism, innovation, energy, and the ‘can do’ attitude of the youth is even more powerful.
That is my hope for India too,” the Prime Minister said, striking a chord with the youngsters who responded with loud cheers. (PM Modi Addresses UN in Hindi, Vajpayee Style) PM Modi concluded his speech with a Sanskrit shloka, “sarve bhavantu sukhina, sarve santu niramaya. Sarve bhadrani pashayantu, ma kashchit dukh bhaagbhavet. Om shanti, shanti, shanti (May all be prosperous and happy, may all be free from disease, may all see what is spiritual upliftment, may no one suffer. May no one suffer,
Om peace, peace, peace).” (PM Modi’s UN Speech in 10 Points) PM Modi’s address at Central Park is one step forward from his Independence Day speech from the Red Fort, where he made sanitation and cleanliness a part of the larger national debate and focus. Mr Modi’s attempt to send across a social message from a music concert was also a first for an Indian politician. He had successfully used diverse methods to send his messages across during his election campaign; now, to deliver his promises, he seems to be picking on new elements. (International Yoga Day Needed: PM Modi At UN) Related Prime Minister Modi Invites New Jersey Governor Chris Christie to India Two Dead in Small Plane Collision in Western New York PM Narendra Modi, Lankan President Mahinda Rajapaksa Meet, Discuss Bilateral and Regional Issues PM Modi was ushered to the stage by popular actor Hugh Jackman, and they were greeted by a loud cheer.
After he concluded his speech, Mr Jackman shook hands with Mr Modi and hugged him. PM Modi was among other world leaders including United Nations Secretary General Ban ki-Moon at the event that featured rapper Jay Z, singer Carrie Underwood, Mr Jackman and other stars.
Mr Modi had arrived to a rock-star welcome in New York on Friday; he was welcomed by the Indian-American community whose members chanted “Modi, Modi” and held up placards to greet him outside the hotel where he is staying. In a rare gesture, Mr Modi came out of his huge convoy to greet the people who had gathered outside his hotel.