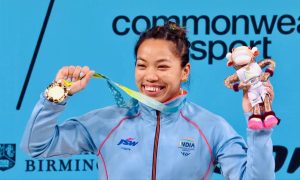 Shortly after Mirabai Chanu historically clinched India’s first gold at the ongoing Commonwealth Games in Birmingham on July 30, Indian shooter Jaspal Rana spoke exclusively to Republic TV and showered praises on the gold medallist. An elated Jaspal Rana said, “I think this medal belongs to the whole country, it’s a proud moment for each and every one of us to celebrate this win, she has made the entire nation proud.”

When asked about the focus of the Indian contingent at the CWG in order to better India’s medal tally of 66 medals in 2018, Rana said, “I honestly hope we should break past that number. With shooting and archery out of the games right now, that number might come down, but looking at how the athletes are playing, if they can beat that number and prove that we Indians cannot be left out by cutting down 2 or 3 events, that’ll be a very proud moment to show that nothing can stop us.”
While speaking about the future of India and Indian talent in the world of sports, Rana added, “The Government and Prime Minister Modi is doing so much with a lot of schemes and a lot of programmes that are reaching from the topmost athletes to the athletes at the grassroots level. Even in a village in India, a kid can come up and be an Olympian. It’s just that we should reach these places because we surely have enough talent; we just have to nurture the talent at the right place and at the right time. In the next few Olympics, we should be in the top 3 I think.”

Indian weightlifter Mirabai Chanu made the nation proud by winning the first gold for India at the ongoing 2022 Commonwealth Games in Birmingham. Chanu won her second Commonwealth gold on Saturday after creating a new Games Record by lifting a combined weight of 201kg (88kg in snatch, 113kg in clean & jerk) in the Women’s 49kg category. Chanu had won her first Commonwealth gold in Gold Coast 2018.
(With Media Report).