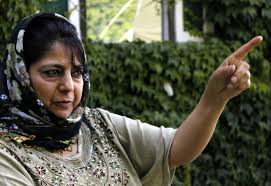 SRINAGAR: In Jammu and Kashmir, after two-month suspense, PDP chief Mehbooba Mufti has dropped a hint of going ahead with BJP in government formation. Speaking during a party function in Jammu today, Mehbooba claimed that she was not afraid of criticism on the issue but wanted a signal from the Centre that it will do everything for the welfare of people of Jammu and Kashmir.

She further said that her party leaders want the formation of the government but she would do that when she feels that the bigger aim was fulfilled. She added, if the aim of forgoing an alliance with BJP is fulfilled, then she has no objection in forming the government and becoming Chief Minister of Jammu and Kashmir.

Mehbooba, whose party has 27 MLAs in the 87-member Jammu and Kashmir Assembly, said if the promises are not fulfilled the formation of the government meant to keep away from the elections for five years. Meanwhile, the PDP leader also called on the State Governor N.N. Vohra in Jammu today and discussed political, developmental and economic issues confronted by the State.