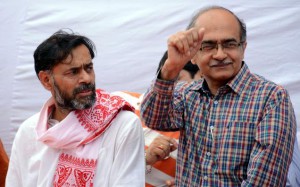 MUMBAI: In what is reminiscent of Stalinist witch-hunts of the Trotskyists on a smaller political scale, more than 370 dissenters within the Maharashtra unit of the Aam Aadmi Party who sided with expelled members Yogendra Yadav and Prashant Bhushan, resigned on Monday citing pressure of excommunication by the Arwind Kejriwal ‘faction’ of the party.
Following a dramatic ad-hoc meeting of the dissenters on Monday afternoon at Pune’s S.M. Joshi hall, 375 members of the State unit submitted their resignations, splitting the AAP State unit wide open.

Speaking to Reporters, expelled AAP leader Maruti Bhapkar said the dissenters would join the Swaraj Samwad Abhiyan led by Mr. Yadav and Mr. Bhushan as an alternative to the AAP and especially to what he dissenters allege, Mr. Kejriwal’s “dictatorial tendencies.”
“The mass exodus is the culmination of the intense dissent within the AAP against Arwind Kejriwal’s dictatorial instincts. We have been systematically sidelined since the Delhi debacle when Mr. Bhushan and Mr. Yadav were heckled by Kejriwal’s clique,” said Mr. Bhapkar, who was himself excommunicated from the AAP on April 24.
The expulsions of Mr. Bhushan and Mr. Yadav, key founder members and political guides of the AAP now turned Mr. Kejriwal’s bêtes noires have brought the fissiparous tendencies within the party into sharp relief.
Last week, the AAP State Executive committee, in a fresh reminder, cautioned workers not to associate with the Swaraj Samwad as evidence of such would be treated as anti-party activity.
The Maharashtra unit of the anti-corruption AAP has been sharply divided ever since Mr. Yadav and Mr. Bhushan were ignominiously kicked-out of the AAP’s National Executive meeting amid high drama for allegedly ‘criticizing’ AAP convener and Delhi Chief Minister Arwind Kejriwal.
While the party’s State coordinator Subhash Ware termed the expulsions as “unfortunate”, desisting from commenting on the growing divide with the AAP’s State unit, Mr. Bhapkar had strongly condemned it as “illegal.”
Mr. Bhapkar, a vocal supporter of Mr. Yadav, was on his side in Delhi when the latter was allegedly manhandled at the National Executive meeting in Delhi late last month.
While lamenting the effect of party schism on the AAP’s progressive campaigns like the ‘Swaraj Abhiyan’, Mr. Bhapkar said he soon planned to kickstart the same in Maharashtra on behalf of the Swaraj Samwad. The ‘Swaraj Abhiyan’, a platform meant to address a broad complex of issues from farmer suicides to special economic zones (SEZs) in order to enhance their rural voter connect, was mooted following the AAP thumping victory in the Delhi election.