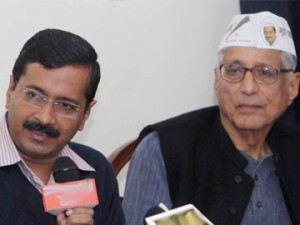 NEW DELHI : Aam Aadmi Party, or the AAP, today fielded Rajmohan Gandhi, grandson of Mahatma Gandhi, as its candidate from the East Delhi Lok Sabha constituency. He will be challenging the Congress’ Sandeep Dikshit, the 49-year-old son of former Delhi chief minister Sheila Dikshit.
Mr Gandhi’s name figures in AAP’s second list of candidates, which was released here today. It comprises 30 names. A leading academic and author, Mr Gandhi, 78, is the oldest son of Mahatma Gandhi’s youngest son Devadas Gandhi. He had joined Mr Kejriwal’s party on February 21.
This will be Mr Gandhi’s third foray into electoral politics. In 1989, he had challenged former prime minister Rajiv Gandhi as a Janata Dal candidate from Amethi. In 1991, he was pitted against the BJP’s Arvind Trivedi in Sabarkantha in 1991. Both the times, he had to taste defeat. The AAP was reportedly trying to convince him to oppose Narendra Modi, the BJP’s prime ministerial face, but is learnt to have refused.
The AAP’s second list also includes the names of Rajan Sushant, former MP from Kangra who had left the BJP last week, and Paras Saklecha, former independent MLA from Ratlam. He enters the race from Mandsour, and will be challenging Congress’ Meenakshi Natarajan.
RTI activist Raza Muzzafar Bhatt will be battling Union minister Farooq Abdullah in Srinagar, and retired bureaucrat Yudhvir Singh Khyalia will be taking on Haryana Janhit Congress leader Kuldeep Bishnoi in his Hissar backyard.
Sticking to its resolve to field candidates with clean image, the start-up party has, in a first, decided to put the list on its website for 5 days, and invited feedbacks on their antecedents.The AAP was first off the block, already having released a first list of 25 candidates for the general elections, among them that of Kumar Vishwas to take on Congress vice president Rahul Gandhi. The BJP is expected to come out with its first list later today.