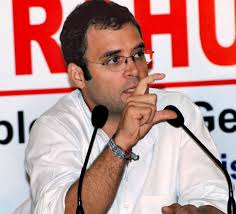 NEW DELHI :today berated Union Minister Salman Khurshid for describing Narendra Modi as “impotent” with a terse statement: “I don’t appreciate this kind of language.” Mr Khurshid had defended his remarks, insisting that he meant Mr Modi’s “administrative incompetence” in handling the 2002 riots in his Gujarat, and also told NDTV that he did not think he would be censured for his choice of words.
But a grim-looking Congress vice president did exactly that today, after a meeting of his party’s campaign committee chaired by his mother and Congress president Sonia Gandhi.
Mr Khurshid, while addressing a gathering in his Lok Sabha constituency Farukkhabad in Uttar Pradesh on Tuesday, had referred to the riots and said without naming Mr Modi, “Our allegation is not that you get people killed, but that you are napunsak (impotent).” Mr Modi’s critics say he did not do enough to stop the riots in his state 14 years ago but recently, the Supreme Court said it could find no evidence to prosecute the Gujarat Chief Minister.
As the BJP demanded an apology, Mr Khurshid told NDTV, “What is personal about it? I am happy to use another word. I can say he is incompetent but it is not enough to describe the mayhem in Gujarat in 2002.”
Asked if he expected a censure from Rahul Gandhi, who had recently cautioned party men against making personal comments, Mr Khurshid said, “I will be very happy if my leader decides that I have crossed the red line…my leader knows better English, and Hindi, than the BJP. (But) give me one single word that expresses my anguish…in English, Hindi, in French or any other language.”

Rahul Gandhi’s advice to Congress leaders followed the controversy over Mani Shankar Aiyar’s comment last month mocking Mr Modi’s tea-seller past.
The BJP has demanded an apology from Mr Khurshid. “The whole world is criticizing him but he is unrepentant. Let Salman Khurshid remember that abuses always boomerang,” said BJP leader Prakash Javadekar, facing off with Mr Khurshid on NDTV on Wednesday.