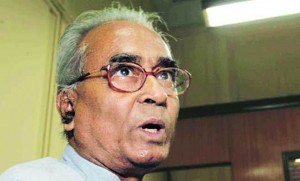 KOLKATA : Yesterday CPI(M) state leadership has taken a `decisive decision’ to expel rebel Razak Molah, a MLA from South 24-Paraganas for several terms and even a minister who was not in the good books of former chief minister Buddadeb Bhattacharjee either.
“His going to public censuring party often embarrassed us and we felt that it’s time he should be expelled,’’ said state party secretary and Politbureau member Biman Basu after he announced the decision of state committee which later Razak welcomed as “the great decision’’ for him “as my deliverance from party of higher class.’’
“Razak wasn’t a man with big ambition but wanted some freedom to criticize the party openly to rectify its mistakes,’’ felt some party insiders who think that just before LS poll his expulsion denotes a deep crisis within the organization.
Political observers here feel “it only organizationally weakened the party and brought into open the crisis the party is slogging into.’’
Interestingly, though Razak was expelled more notorious Laksman Seth in various scams was spared what threw up another surprise for the observers here.
“The State Committee decision would only split up votes which would have gone in favour of the organization during the polls and my open up wounds that would keep bleeding for the party.
“However, Molah isn’t a leader of Nirepen Chakraborty’s stature, former Tripura chief minister who for his crossing sword with Jyoti Basu was expelled and gradually reduced,’’ said a top CPI(M) leader, adding, “let’s not forget that.’’
But badly cornered, other party leaders who do not share the view said: “Nripenda was a great leader, but party was much stronger then and it wasn’t like it is now and Molha’s expulsion may just open up new avenues for our rivals which party isn’t strong enough to deal with,’’ said another leader who did not agree with State Committee decision.
Incidentally, Molha who openly told media that he is already working on a new political platform which will fight the election, would pose a threat to an already devastated party in areas he dominated for years. The party opened up a wound it would not be able to stop from bleeding!