SAHARSA(Bihar): Making a last ditch effort to turn the tide in favour of JD(U) president Sharad Yadav, locked in multi-cornered contest in Madhepura, Bihar Chief Minister Nitish Kumar on Sunday appealed to the voters to send Yadav to Parliament.“Yadav is a tall national leader who must sit in Parliament and continue to raise voice on behalf of the poor and deprived sections of the society,” he told an election meeting at Sonbarsa high school ground in favour of the JD(U) national president. 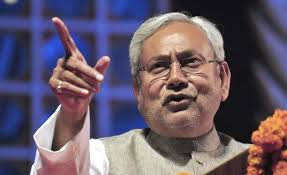 “The onus is on you (voters) to ensure Yadav’s victory from Madhepura this time too,” Kumar said in an emotional appeal to the electorate of Madhepura parliamentary constituency.Alleging that there was a collusion between the RJD and BJP under which that the saffron party has intentionally fielded a weak candidate (Vijay Kumar Singh), the chief minister said his erstwhile ally has hatched a conspiracy to transfer votes to the RJD nominee Rajesh Ranjan alias Pappu Yadav to ensure defeat of the JD(U) president.
“The BJP candidate is a vote ‘katwa’ (one who gets enough votes to turn the outcome) who has been put up to take away votes from the JD(U) to ensure the RJD nominee’s victory,” he said.Kumar, who is single-handedly spearheading JD(U)’s campaign in Bihar, hit out at the BJP for resorting to communal and divisive agendas to grab power at the Centre.“I took a considered decision last year to sever ties with the BJP and risk stability of government for the sake of ideology for which I have no regrets,” he said.“I may bite dust in public life, but will never make compromise with secularism,” the chief minister remarked.