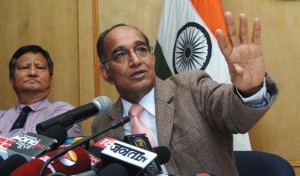 NEW DELI : Lok Sabha elections will be held from April 7 to May 12 spread over nine days in the highest number of polling days so far involving an electorate of 81.4 crore, the Election Commission announced on Wednesday.
Counting of votes in all the 543 Lok Sabha constituencies will be held on a single day on May 16, Chief Election Commissioner V S Sampath announced at a press conference flanked by ECs H S Brahma and S N A Zaidi.Assembly elections will also be held simultaneously in the states of Andhra Pradesh, including Telangana region, Odisha and Sikkim.Sampath was at pains to clarify that it is not a nine-phased polling and the whole exercise will be over in 72 days, three days less than the last elections.
The Model Code of Conduct for parties and governments comes into force with immediate effect, he said.
The first polling day on April 7 will cover six Lok Sabha constituencies in two states, while the second on April 9 will cover seven constituencies in five states.
92 constituencies will go to polls in 14 states on the third day on April 10, while a small number of five constituencies in three states will be covered on the fourth day on April 12.
The largest chunk of 122 Lok Sabha seats will go to polls in 13 states on April 17, the fifth day of poll, while the sixth day will witness polling in 117 seats in 12 states on April 24.The seventh day of polling on April 30 will choose representatives in 89 constituencies spread over nine states and the eighth day on May 7will cover 64 seats in seven states.Polling will conclude on the ninth day on May 12 with elections in 41 constituencies in three states.
Andhra Pradesh, which has 42 Lok Sabha seats, will go to polls on April 30 and May 7. Elections in the respective assembly segments will be held simultaneously.
The first day of polling on April 30 will cover 17 Lok Sabha seats and 119 Assembly seats in the Telangana region and the second on May 7will cover 25 Lok Sabha seats and 175 Assembly seats in the Seemandhra region.
Sampath explained that irrespective of the appointed day for the creation of the new state of Telangana, elections will be held in the Lok Sabha and Assembly constituencies as they exist today.The corresponding Lok Sabha and Assembly constituencies would go to the respective states once the bifurcation process of the state is complete.Arunachal Pradesh will have single day polling on April 9 to cover two constituencies, while Assam with 14 Lok Sabha seats will have a three-day pollon April 7, 12 and 24.Battlestate of Bihar with 40 constituencies will have polling on six days beginning April 10, 17, 24, 30 continued…