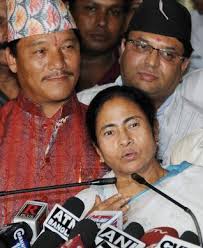 KOLKATA: Possibility of BJP entering Darjeeling by tying up with the Gorkha Jan Mukti Morcha (GJMM) has set alarm bells ringing in Trinamool Congress camp here on early Tuesday.GJMM leader Bimal Gurung recent visit to Delhi on the eve of Congress’ success story with separate Telengana State, “may have ended up with former dropping hints that it would go the same way like it had gone in 2009.’’
Though the GJMM leaders declined to speak on the issue, but insiders said: “Gurung’s sudden change of arrangement with West Bengal Chief Minister Mamata Banerjee that the party would not back a TMC candidate from Darjeeling came from the realization that BJP is emerging victorious in the coming LS elections.’’
However, the TMC which didn’t yet react politically, but it is learnt that party leader Mukul Roy has called their local leaders to discuss the issue urgently.
Incidentally, the GJMM had supported the BJP leader Jaswant Singh from Darjeeling LS seat in 2009.
TMC leader Mamata Banerjee, who worked very hard politically to win over the hill people, finally persuaded the Gorkha leaders, including Gurung to back a TMC candidate from Hill.
“But Gurung’s sudden change has upset our plans when they know that we would seriously fight all 42 seats and vowed to win the largest number,’’ said a senior TMC leader who like his leader, smelt “something wrong with Gurung’s hints.’’
Earlier, Banerjee when recently was in the Hills, felt national football player Baichung Bhutia, could be an ideal candidate and she introduced him to Gurung.
Political observers here feel that Gurung who shook hands with Bhutia but “kept his real plans to his chest.’’And in case if Gurung’s hints of tying up with the BJP is decided, Darjeeling would set to upset Mamata Banerjee’s Hill apple curt first in 2014 LS elections in Bengal.
Though the State BJP leaders would say nothing on grounds that they “do not know anything about such alliance.’’