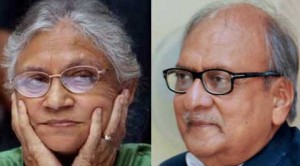 NEW DELHI : Sheila Dikshit, a former three-term Chief Minister of Delhi, was on late Tuesday night appointed Governor of Kerala within three months of her defeat in the recent Assembly polls. A Rashtrapati Bhavan spokesperson said that 75-year-old Dikshit succeeds Nikhil Kumar, a former Delhi Police Commissioner, who resigned yesterday.
Late on Tuesday evening, Kerala Governor Nikhil Kumar resigned, sending out an additional signal for the coming RJD-Congress alliance.The RJD and Congress are likely to announce a seat-sharing agreement for Bihar on Wednesday. The Congress has agreed to leave the “contentious” Madhubani seat for the RJD, and Lalu Prasad has agreed to give 12 seats — one more than his earlier offer — to the Congress. The RJD will also leave a seat for the NCP.
Kumar — who has been pressing for the deal — was likely to contest the Aurangabad seat, a traditional Congress stronghold that has long been represented by his family.Kumar, a former commissioner of Delhi Police, won the 2004 Lok Sabha election from Aurangabad. He faxed his resignation to Rashtrapati Bhawan from Kochi airport after landing there from Delhi on Tuesday evening.
The governor told reporters in Kochi that he was quitting his post, and that the Congress leadership would make an announcement on his contesting the Lok Sabha elections in a few days.Earlier in the day, Dikshit, a senior Congress leader, had met Union minister Sushilkumar Shinde and the decision to make her Kerala Governor was conveyed to her.
The appointment of a governor is essentially a political call, and making an announcement literally hours before elections are announced is likely to be strongly criticised. The President had forced the government to back off on its move to bring anti-corruption ordinances last week, and it was uncertain whether he would agree to go along with another decision by the outgoing government.Earlier, RJD President Lalu Prasad visited home of 72-year-old Kumar in Patna setting off speculation of his contesting the Aurangabad Parliamentary seat.
RJD and Congress sources confirmed the visit of Prasad to seek the blessings of Kumar’s mother Kishori Sinha and to meet the Kerala Governor.In Bihar, the Congress scaled down its position after the JD(U) rejected its last-moment offer for an alliance, and Lalu began to campaign on his own. The RJD chief will be on a three-day tour of nine Lok Sabha constituencies on Wednesday, and is unlikely to be present when the tie-up with the Congress is announced.