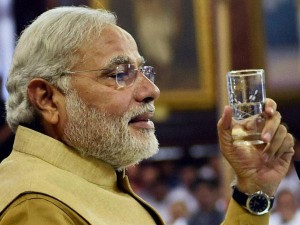 NEW DELHI : In his first speech in a Parliament discussion, Prime Minister Narendra Modi today presented his plan to change the country’s identity from “Scam India” to Skilled India.” The leitmotif was inclusiveness.From his political opponents he invited constructive criticism and promised to include their suggestions in governance. To the people, he promised inclusive development.
Replying to the debate on the President’s address to a joint session on his government’s agenda, his first speech in Parliament, the new PM spelled out his priorities, chief among them fighting poverty and empowering villages, with an emphasis on education.
The President, Mr Modi recalled, had used the word “Rurban – where the facilities are urban but the core is rural.” The PM reached out to minorities, stressing that every part of society had to be strengthened for the country to be strong. “When I was young , a Muslim man repaired cycles, three generations his family does the same. Why is that? We need to work for all parts of society. If one part of society is weak, society as a whole can never be strong,” he said.
He welcomed the assertion of a speaker from Tamil Nadu who said that his state’s model was better than the “Gujarat Model of development” that Mr Modi has pitched in his candidacy for PM. States, he said, must engage in healthy competition in the race for development.He emphasised skill development in a population of 65% young people. “Our neighbour China is growing old, we are growing young. Its a big advantage for us,” Mr Modi said.
The entire world, the PM said, needs a work force and again made his oft-repeated wish: “Can’t we export teachers and doctors,” he asked, adding, “A businessmen will bring back dollars, a teacher will bring back an entire generation.” In a speech raised a few laughs and much applause, Mr Modi made some jibes at the opposition, but repeatedly said that he would like the support of the entire House in good governance.  He noted that  various questions were raised by speakers from parties on important issues during the debate and said, “all of them had a hope in them. I take this as good sign.” Elected members on either side of the political divide, Mr Modi said, are the custodians of the people’s hope. “Mulayam Singhji said that he has run a govt and hence he is asking how am I going to fulfill all the promises. I say, let us try. We will figure out a way and if there is problem senior leaders like him are always there to guide us.,” Mr Modi said.  He began and ended by asking to be excused if he had made a mistake. “When a new member like me is speaking, I hope you will forgive me if I make mistakes,” he said, making it clear that he was not here “to criticise any government.”