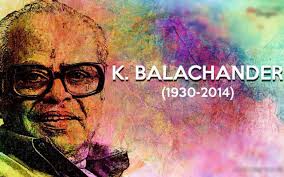 CHENNAI: K Balachander, who strode the Tamil Cinema as a colossus as playwright turned director in the 70’s and 80s, passed away at the age of 84 leaving a rich legacy of films that went beyond his times and a vaccum that can never be filled by any as him who challenged societal norms and shocked all with his controversial themes.
Balachander is best remembered for two things – he was the legend who launched the subsequent legends of Tamil Cinema Rajnikanth and Kamalahasan. Second he was the avantegardedirector who took on the male dominated Tamil Cinema ( MGR/SivajiGanesan/Gemini Ganesan) by the horns and made the female character the centre piece of his narration of his bold themes. His themes were the bette noire of a cloistered society in Tamil Nadu.
84 year old Balachander breathed his last in Kauvery Hospital in the heart of the city succumbing to a urinary infection and other age related problems.
On hearing the news of his death, former Chief Minister of Tamil Nadu M Karunanidhi rushed to the hospital to condole his bereaved family besides Rajnikanth and Kamalahasan , the actors he mentored. He was given a tearful farewell by the large multitude of actors, actresses, directors,producers,the who is who of Tamil cinema.
Balachander had made over 150 films to his credit, including ‘AvalOruThodarKathai(She is a serial story) ‘, ‘Avargal (Them) ‘, ‘VarumayinNiramSivappu (Poverty is Red in Colour) and political films such as “ AchhamillaiAchamillai “( There is nothing to fear) and “ ThaneerThaneer” and the immortal comedy “ TilluMullu (adapted fromHrishikesh Mukherjees GolMaal) .
All of Balachanders films were ahead of his times and sometimes challenged closely held beliefs in the socio cultural mileu of the conservative Brahmin families.

His movies shocked the sensibilities of Brahmin community as he himself was a high caste Brahmin from Thanjavur district, the rice bowl of the state.
Taste the flavour of movies such as Arangetram , the story of a conservative Brahmin family living closeted in an segregated Brahmin neighbourhood called Agraharam, where the daughter ( Pramila) of the large impoverished Brahmin family takes to prostitution as a means to rescue the family from financial distress.

Or AvalOrunThodarKadhai, the protégé Sujata, heroine who sacrifices her life to support her family – she is a working woman hard pressed to support her widowed sister, unmarried sister and blind brother. The movie bore close resemblance to RitwithGhatak’s“ MegheDakka Tare”, who also projected the female character as one to be sympathised with.

ApoorvaRagankal was a shocker in its theme where the Hero Kamalahasan falls for an elderly woman and his father (Major Sunder Rajan) falls for the same woman’s daughter born out of wedlock. The theme was absolutely shunned by purists in Tamil Society as it explored complex relationships that defied society’s norms of organised social behaviour. But it was hailed by critics as a classic – the movie introduced Rajnikanth as a sidey hero.

If Balachander handled social themes in a shocking manner, he also handled comedy deftly as he proved with TilluMullu (GolMaal) that one could turn a hero into a comedian as he did with Rajnikanth and Kamalahasan playing a cameo as a fake lawyer in the end.Balachander also proved that he could make a comedian the hero of a film with the accomplished Nagesh in EthirNeechhal ( Swimming Against the Tide) and Server Sundaram ( which was later made in Hindi with Mehmood as the hero—Main Sunder Hoon).

Balachander could also handle political themes with consummate ease. Take for instance ThaneerThaneer, where he explored the politics of a drought hit village Athipatti . That is, how corrupt politicians turned drought in a village to their advantage and subvert the process of a cooperative movement that tries to bring water to the village.

AchhamillaiAchhamillaiexplores the journey of a villager (Rajesh) who marries his long cherished love (Sarita) but the lures of lucre in politics changes him into a monster embroiled in corruption and adultery and his wife avenges his moral downfall by stabbing him in public at a public meeting hiding the dagger in the garland she uses to befool him.

VarymayingNiramSigappu explores the theme of unemployment of educated youth. While ManmadhaLeelai satirically exposes the sexual fantasies of a middle class youth.

Whether he wrote plays and staged them or directed movies, all of them challenged closely held beliefs of a cloistered Brahmin-Hindu society and presented controversial stories in a manner that shocked the conservative society in Tamil Nadu. When the Tamil Cinema changed track and went for visual stories and storytelling in different form with the arrival of BahratiRaaja and BaluMahendra , he exploited the medium of the TV serials to present his productions , where again the female was the protagonist.

Balachander was at an early age attracted to theatre and drama and took part in stage plays.After graduating in zoology, Balachander joined the Accountant General’s office and pursued his theatre interest with the United Amateur Artistes, a drama company.Later, he started his own drama company and his play ‘Major Chandrakanth’ became a hit.After entering the film world, Balachander made the play into a movie which was also a big hit.

Many of his hit movies were earlier stage plays like ‘Server Sundaram’, ‘Neerkumizhi’ and ‘Mezhuguvarthi’ among others.All his dramas and movies focussed on middle class personages and portrayed inter-personal relationships.His debut movie was  ‘Neerkumizhi’, starring comedian Nagesh. It was followed by movies like ‘Major Chandrakanth’ and ‘BamaVijayam’.

Kamal Haasan and RathiAgnihotri made their Bollywood debut in Balachandar’s Hindi movie ‘EkDuujeKeLiye, which was the biggest grosser in hindi cinema at that time’. The same film made in teluguMaroCharithra ran for a full year in Safire theatre in Chennai uninterrupted, a record yet to be equalled by any tamil cinema.

Balachander also made a few Telugu films like ‘AnthuleniKada’, ‘ThoorpaPadamara’, ‘Marocharitra’ and ‘GuppeduManasu’.In Hindi, he directed ‘Aaina’, ‘EkDuujeKeLiye’ and ‘EkNahiPaheli’.Most of his films in other languages were remakes of his own Tamil films.

Balachander was a recipient of the Dada SahebPhalke Award. He was awarded the Padma Shri in 1987.There will never be another Balachander in Indian cinema. His loss is immeasurable to all those cineastes who like the auteur theory and avantegarde cinema.