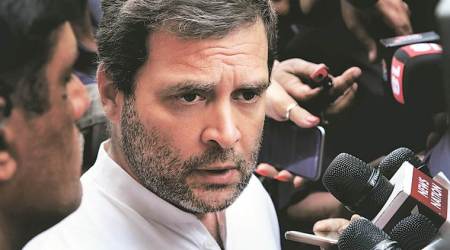 Commenting on the killing of Gauri Lankesh, the Congress leader said, “It is a philosophy…anybody who speaks against the ideology of BJP and RSS, is pressurised, beaten, attacked and even killed.”
“People say that the PM is quiet and not said anything, the point is that the entire ideology is to crush dissent,” Rahul Gandhi added. Calling PM Modi a skilled ‘Hindutva politician’, Rahul said, “Sometimes, under pressure, the Prime Minister makes some statements. But the entire idea is to crush dissent,” adding that “non-violence is the history of this nation… Murder cannot be justified”. The Gandhi scion further accused the PM of double speak.
Congress president Sonia Gandhi also condemned the killing of Gauri Lankesh and said it was a chilling reminder that “intolerance and bigotry is raising its ugly head in our society”. Information and Broadcasting Minister Smriti Irani on Wednesday condemned the killing of the senior journalist at her Bengaluru home and demanded a speedy investigation.

“Known for her fearless and independent views, Gauri Lankesh had extraordinary grit and determination to take on the system,” a  News Agency quoted Sonia Gandhi as saying in a statement from the All India Congress Committee (AICC).

“The series of killings of rationalists, free thinkers and journalists in the country has created an atmosphere that dissent, ideological differences and divergence of views can endanger our lives. This cannot be and should not be tolerated.”“It is an extremely sad moment for our democracy and a chilling reminder of the fact that intolerance and bigotry is raising its ugly head in our society.”

“The idea is that there should only be once voice in the country.” Rahul seemingly also attacked Prime Minister Narendra Modi, commenting, “Sometimes the PM speaks under pressure but the entire idea is to crush dissent and this is resulting in a very serious problem in India.” Modi’s words have two meanings – one for his base of supporters and the other for the rest of the world,” Gandhi said.

The Congress vice-president’s press briefing sparked an angry reaction from Union transport minister Nitin Gadkari who slammed Gandhi’s “nonsense”. There is no proof behind Gandhi’s comments and such allegations are baseless, Gadkari said, adding that PM Modi is not in the country and that it should not be expected of the prime minister to speak on every issue.

Gauri Lankesh, who was the editor of a weekly Kannada tabloid magazine Lankesh Patrike, was killed last night after being shot at least three times. She was shot by a helmet-wearing assailant while entering her home in Bengaluru. Lankesh was critical of the Hindutva brigade and was last year convicted in a defamation case filed by MP Pralhad Joshi who had objected to a report against BJP leaders.(with Agency inputs).