NEW DELHI : The Supreme Court Friday referred to a constitution bench the question whether the government can release a life term convict whose death sentence has been converted into life imprisonment and said that the seven conspirators in Rajiv Gandhi assassination case will not be released for now.
The apex court bench headed by Chief Justice P. Sathasivam framed several questions to be addressed by the constitution bench including whether after commutation of the death sentence into life imprisonment, can the government further grant them remission by releasing them.The court also said that the constitution bench will also address which is the appropriate government under the code of criminal procedure – whether it is the state government or the central government or both.Former prime minister Rajiv Gandhi was killed in 1991.
The  assassination of former prime minister Rajiv Gandhi will remain in jail, the Supreme Court ruled today. A Constitution bench will decide on whether they can be granted freedom, and whether the Centre or the Tamil Nadu government can do so.The court said a Constitution bench, or a larger bench of five or more judges, will be set up within three months.Top 10 updates on this story: 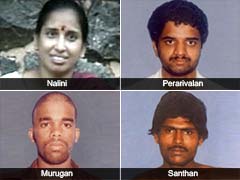 (1)The seven convicts listed in the case are all in jail in Tamil Nadu; each of them has spent more than 20 years in prison. (2)In February, Chief Minister J Jayalalithaa said they would be released; the union government challenged her decision in the Supreme Court, which said the convicts would remain in jail till it gives its order.(3) On February 18, the Supreme Court commuted the death sentence for three of the convicts, factoring in an 11-year delay in deciding their mercy petitions. In 2011, their appeal for clemency was rejected by the President of India. (4) Chief Minister J Jayalalithaa said that verdict empowers her government to release not just the trio of prisoners on death row – Santhan, Murugan and Perarivalan – but four others who have been sentenced to life in prison. (5) Among them is Nalini Sriharan, wife of Murugan.
In 2008, Priyanka Gandhi, daughter of Rajiv, had met with her in Vellore jail. (6) “The release of the killers of a former prime minister of India and our great leader, as well as several other innocent Indians, would be contrary to all principles of justice,” Prime Minister Manmohan Singh had said in February in reaction to Jayalalithaa’s announcement. (7) Her initiative was seen as an attempt to win support ahead of the national election and prove that she can outdo her rivals when it comes to supporting Tamils and standing up to the Centre.
(8) Many in Tamil Nadu believe that the seven prisoners who Jayalalithaa wants to free played minor roles in the assassination of Rajiv Gandhi and were duped into taking part in a plot they knew little about. (9) Rajiv Gandhi was killed while campaigning in Tamil Nadu by a suicide bomber from the Liberation Tigers of Tamil Eelam (LTTE), the separatist rebel group from neighbouring Sri Lanka.(10) Rajiv became India’s youngest-ever leader after his mother, prime minister Indira Gandhi, was assassinated in October 1984. His son Rahul, who was 20 when his father died and  is now the Congress vice president had said in February, “If some person kills the PM and is released then how will a common man… get justice?”