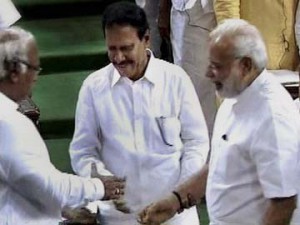 NEW DELHI : Tamil Nadu Chief Minister J Jayalalithaa called the Prime Minister this evening to thank him for enabling the election of her partyman, M Thambidurai, as the Deputy Speaker of the Lok Sabha. Mr Thambidurai, 67, was unanimously elected after his name was proposed by Home Minister Rajnath Singh and seconded by External Affairs Minister Sushma Swaraj.
The AIADMK is the third-largest party in the Lok Sabha, behind the BJP and the Congress. In the Rajya Sabha, where the BJP has just 46 of 250 members, the AIADMK’s 10 representatives can help the government push through important legislation.
In parliament, the Prime Minister described the new Deputy Speaker as a “multi-faceted personality” and thanked all parties, especially those in the Opposition, for allowing a unanimous election.Mr Thambidurai, who was Deputy Speaker from 1985 to 1989, was the only candidate to file his nomination for the post. 11 parties including the ruling BJP and the opposition Congress supported him.
Mr Thambidurai is serving his fifth term as a parliamentarian. After his election, he said was “deeply overwhelmed” by the cross-party support.After the AIADMK leader was declared elected, Mr Modi and Mallikarjun Kharge, who leads the Congress in the Lok Sabha,  escorted Mr Thamibudrai to his new seat.
Bhagwant Mann of the Aam Aadmi party, a stand-up comedian, quipped that Mr Thambidurai “should delay in ringing the bell” when members of smaller parties speak in the House.